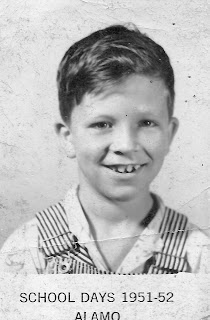 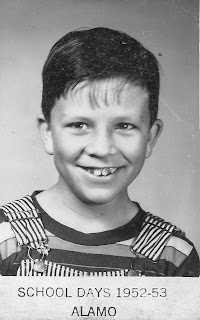 fourth grade with Mrs. Gunn, a quiet, dignified teacher who loved her students, was marred by my sins finally catching up to me.  I received my first paddling at school.  I can’t even remember the reason for the punishment (except to be sure that it was probably unjustified.)  Whatever, Mrs. Gunn called Mom and explained what was going to take place, and Mom said “No problem.”  Mother was not like the mothers of today who would have yelled, “You touch him and I’ll sue!”  I remember Mrs. Gunn holding a wooden paddle and asking me to bend over, and, with Mr. Loy the principal looking on, popping me twice on the bottom.  On the first swing she lifted me right out of my shoes, and on the second swing…….OK, that’s not true.  I remember thinking that I don’t want this to happen again, but it was more embarrassing than painful.
Although Mrs Gunn beat me unmercifully (OK, disregard that), she also taught me the enjoyment of reading.  She could read a story with such feeling that I could see the events taking place in my imagination.  Our fourth grade reader was entitled "After the Sun Sets," a collection of what would be called nowdays fables and fairy tales, and I loved the book so much I persuaded Mother to buy a copy for me.  As I write these words, I am looking at that old fourth grade reader, and I still enjoy pleasant memories.
It was also in my fourth grade year that I discovered totally by accident that I was practically blind.  One day while Mom was shopping and Dad, Judy, and I were sitting in our car in the Sears, Roebuck and Company parking lot in Baytown, Judy and Dad were playing a game which involved reading license plates of nearby cars.  I wanted to play, but I discovered I couldn’t see the plates; they were all too fuzzy. Dad told Mom, and the next thing you know I was in an optometrist’s office being fitted for glasses.  Funny, almost the same thing happened to my son years later during his fourth grade year.
Another rite of passage occurred during the fourth grade year…I turned ten years old.  That may not sound too momentous, but there was a tradition in those days that when a boy turned ten years old, he was considered responsible enough to carry a knife.  So on my tenth birthday I received a pocket knife and a real hunting knife.  Many times during recess at school we boys would grab a limb or a piece of wood and spend our time whittling some sort of object.  When it was new and shiny, I took my hunting knife to school to show the other boys.  It was a beauty…five inch Swedish steel blade with a maple handle and stainless “S” shaped hilt.  I can describe it exactly because I am looking at it as I type these words.  Today, sixty years later, it is a priceless treasure of my youth.  Boys with knives at school….can you imagine that situation today?
Th 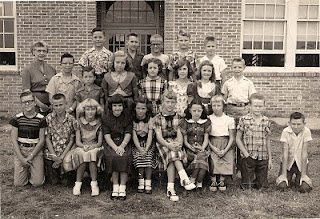 e fifth grade was a momentous year.  My teacher was Mrs. Hazelwood, who was Mrs. Dobbs on steroids.  Where Mrs. Dobbs made you keep your eyes down, Mrs. Hazelwood made you want to climb under your desk.  Actually, after the fourth grade beating(!) I endured at the hands of Mrs. Gunn, I had turned unto a pretty good kid, but some of the others were slow learners. Mrs. Hazelwood could also be funny…like the day when she was yelling at someone, and her false teeth nearly fell out of her mouth. That was the day lot of us boys learned to laugh with our mouths closed and with straight faces. When it happened, she stopped and quickly ran out of the room.  We were all too scared to make a sound, but inside we were rolling on the floor.  At recess it was the major subject of comment.
Two of my many cousins shared Mrs. Hazelwood's fifth grade class with me.  In the photo standing next to me (I'm the one with the striped coveralls standing next to Mrs. Hazelwood...obviously her favorite student) is Freddy Railsback, who, though a year younger than I, was apparently so smart they bumped him up from the fourth to the fifth grade in midyear.  He was a little guy at that time but eventually caught up to the rest of us in height.  Next to him in the photo is Carletta Downing, a member of the T.E. Downing clan who lived across the street and down a ways from us. Carletta was the opposite of Freddy; she was big for her age, and nobody messed with Carletta.
Th 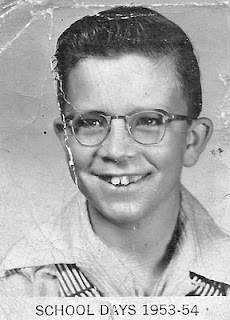 e fifth grade was when I discovered…girls.  I fell in love with Mary Jo Fields, or was it Sylvia Watson?….no, it was Frances Oliver…no, wait, it was Dian Anderson…no, it was….well, you get the picture.  There was no “going steady” or anything like that, but just knowing that someone “liked” you was almost like holy matrimony.  Of course, I learned also that romance involved competition, and my good friends James Wallace, Vernis Haynes, Mark Blankenship, Sherman Davis, and others sometimes became my mortal enemies as we jousted for the favors of our Chosen One.
But when the chips were down, I won the grand prize.  Our class had an election for the favorite girl and boy of the fifth grade, and Dian Anderson and I were the winners. She had been my favorite for most of the fifth grade, and I was in seventh heaven.  To top it off, the fifth grade had been the top grade-level fundraiser for the Spring Festival, and as a result she and I reigned as King and Queen of Alamo Elementary for the festivities. It was a night to remember as we in our regal robes paraded through the packed auditorium onto the stage, and assumed our thrones.  Songs and various acts entertained the Royal Couple as we sat there happy as clams.  My main memory? I wore a white shirt with a tie underneath my red velvet robe.  When I took my robe off after the festivities, my shirt was red. I had sweated so much that the red coloring of the velvet soaked into my shirt.  Mom threw my shirt away, but it was worth it.
Before I began my sixth grade year, my family moved to the home in which a Downing would reside for the next 55 years, at 6134 Cedar Bayou Crosby Road.  I left my friends of Alamo Elementary and gained new ones at Cedar Bayou Elementary and Junior High, which I would attend for the next four years.  We would all meet again at Robert E. Lee High School, but by then we scarcely knew each other.  Young children are highly resilient and have very short memories, and by the time we entered the tenth grade, our circles of friends had vastly expanded.  For some of my Alamo friends it would not be until 2009 during a class reunion that I would speak to them again.  We have now lived most of our productive lives, and the memories of our youth have grown in value and sentimentality.
Posted by Bob Downing 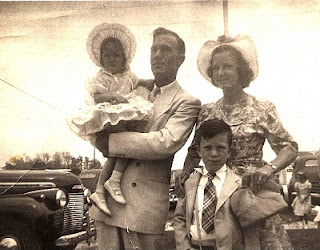