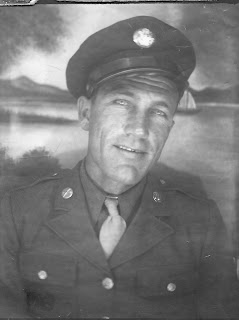 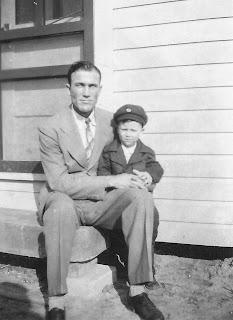 During this time, Mom and Dad were still struggling, and in lieu of spending money for toys, Dad used his carpentry skills and built me wooden cars, trucks, bats, wooden horses, you name it.  He was a skillful carver with a knife.  I’d pay a lot of money for one of those lost toys today.
Recreational activity was pretty limited in those days, but two things stand out in my memory.  On in there was a W.O.W. Hall (Woodmen of the World) which about every Saturday night held a big dance and party.  I can remember sitting in a chair as a wallflower watching my mom and dad trip the light fantastic to the sound of a Hank Williams tune.  While the dancing was going on, someone would sprinkle some kind of wax on the wooden floor to make it slicker, the better to slide gracefully around on, I guess.  The second memory involved an ice house on which sold two items: block ice and cold beer.  We would pull up in Dad’s Mercury with the suicide doors, and Dad would enjoy a few cold beers.  Strangely, I never saw my dad drunk, and I never saw my mom take a drink at all.  One night we as pulled away from the ice house and Dad turned into the traffic, the right rear door of the Mercury swung open.  I, being a little kid, was standing behind the front seat (no seatbelts in those days) and fell toward the open door, but somehow caught myself (or someone caught me, I can’t remember) before I planted myself on the pavement.  Even before my parents joined the church, God had his hand on them (and me.)
I was also introduced to the educational process at this time when Mom enrolled me in a small, neighborhood kindergarten school in Old Baytown (the name new folks called the old part of .)  Most kids did not go to kindergarten back then, but Mom knew that I was special (or maybe needed some more help.)  The thing I remember about kindergarten was that it was a morning deal, ending about .  Mom would drop me off and come back at to pick me up the same as the parents of all the kids.  The building was close to the street, and, at , the teacher would say, “Class dismissed…goodbye!” and kick us out the door.  There was no place to wait, so we kids would play in the street until we saw our parents' cars coming.  The parent would ease slowly up to the group of kids, and the appropriate child would hop in and they would drive away…and we would occupy the street again until the next car arrived.  How we all survived is beyond me.
My biggest memory on was about , when Mom and Dad brought my sister, Judy, home from the hospital.  I’m not sure who took care of me during the hospital visit, but when we all reassembled on , suddenly there was this new little kid.  In time, Dad decided that two adults and two little kids in one room was a bit much, so about year later, we moved to roomier pastures, namely . (See my blog, “206 Hafer, 1949-54”) 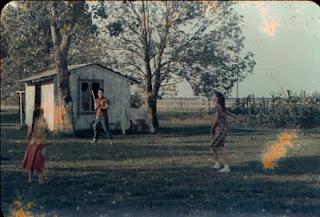 I am not the author of the following words; they came to me in a random email and the original author is unknown. They are so profound, however, I could not pass them up…with a little embellishment from myself.

At the very start, we survived being born to mothers who smoked and/or drank while they were pregnant. Our mothers took aspirin, ate blue cheese dressing and tuna from a can, and didn’t get tested for diabetes…or much of anything else. Then, after the trauma of birth, we were put to sleep on our tummies in our baby cribs covered with bright colored lead-based paints. As infants and children, we would ride in cars with no car seats, no booster seats, no seat belts, no air bags, worn tires, and weak brakes. We had no child-proof lids on medicine bottles, locks on doors or cabinets, and, when we rode our bikes, we had baseball caps, not helmets, on our heads.
Riding in the back of a pickup truck on a warm day was always a special treat, and, when thirsty, we drank water from a backyard garden hose and not a bottle. We shared one bottled soft drink with four friends, and no one died from this. We ate cupcakes, white bread, real butter, and bacon. We drank Kool-Aid made with real white sugar…and we weren’t overweight.
We were either in school or we played outside. If the weather was nice, we were seldom inside our houses. We would leave home in the morning and play all day, coming home only for snacks and lunch, but we had to be home by the time the street lights came on at night. No one was able to reach us practically all day…and we were okay. We guys would spend hours building our go-carts out of wood scraps and wagon wheels and ride them down the hill realizing then that we should have considered brakes. After running into bushes and hitting street curbs a few times, we solved the problem.
We did not have Play Stations, Nintendos, and X-boxes. There were no video games, no 150 channels on cable, no video movies or DVDs, no iPods, so smart phones, no internet, and no chat rooms. We had real human friends, and we went outside and found them.
We fell out of trees, got cut, broke bones, and teeth…and there were no lawsuits…even if it happened at school or someone else’s home. If we got a paddling at school, we got another one at home, because our parents supported our teachers. We received spankings with wooden spoons, switches, ping-pong paddles, a leather belt, or just a bare hand, and no one called child services to report abuse.      We ate worms and mud pies (real), and the worms did not live in us forever. We boys were given BB guns and pocket knives for our tenth birthday as a rite of passage. We made up games with sticks and tennis balls, and although we were warned by our parents, we did not put out too many eyes. We rode bikes or walked to a friend’s house and knocked on the door. If no one answered, we would just walk in…the door was unlocked anyway.      Little League had tryouts, and not everyone made the team. Those who did not learned to deal with the disappointment. The idea of a parent bailing us out if we broke the law was unheard of…the parent sided with the law.
Using the warped guidelines of the current crop of child psychologists and human development theorists, each of us who grew up in the 40s, 50s, 60s, and 70s would have been classified “severely at risk.” And yet our generations have produced some of the finest problem solvers, risk takers, and inventors in history. We experienced success and failure, freedom and responsibility…and we learned how to deal with it all. To each of us who truly experienced life and survived…cheers!
Notable quote:                                                                                                                      "With hurricanes, tornadoes, fires out of control, mud slides, flooding, severe thunderstorms, threats of flu epidemics and terrorist attacks…are we sure this is a good time to want to take “under God” out of the Pledge of Allegiance?” 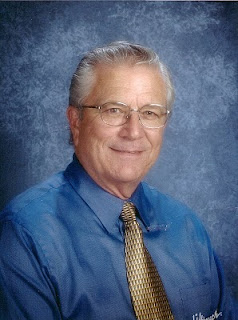