George Dennis Creel passed from this life at the far too young age of 61. He was one of my closest friends from the early days of my youth. My parents in 1950 became part of the church where George and his considerably sized family had attended since its founding in the early forties. I was seven years old when my family began attending church, and George quickly became a companion and a confidante. There were several young boys in the church at that time, but two, George and Ronny Guidroz, the pastor’s son, seemed to share the same interests and activities as I. We spent many Sunday afternoons at one of our parents’ homes between Sunday School in the morning and evangelistic service Sunday night. 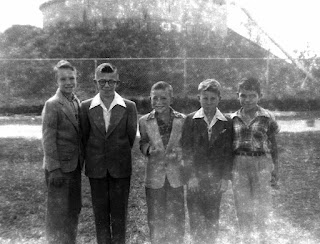 This photo was taken in February, 1956, and shows five of my friends from Peace Tabernacle. They are (left to right) Jerry Kemplay, Jerry Smith, David Smith, George Creel, and Ronny Guidroz.