Two of the speakers were gentlemen whom I had heard before: General Colin Powell and Mr. Zig Ziglar. Others were notable, but having never heard them in person, I wanted to get my own reaction to their message, primarily Rudy Giuliani and Sarah Palin. So, bright and early on a cool Monday morning, I left home and headed to the in downtown . As usual, I wanted to get there early, so I left home about 5:55 am, arriving at the parking garage about 45 minutes later. I realized my expenses for the day were just beginning when I had to pay $20.00 to park my car. But park it I did, and entered the center about 35 minutes before the service was to begin. I was in the “Premier” seating area as compared to the “Executive” seating area, both of which were not to be confused with the “Exclusive” seating area down in front of the stage. If it had been a football stadium, I could say I was in the end zone, but it actually was good, because when Sarah Palin used a podium, she faced us, and she wasn’t too far away to make it distracting. Getting a cup of coffee (small) for $3.00, I made my way to my seat.
At 8:00 the lights dimmed and a young guy came on the stage and sang a really beautiful Star Spangled Banner, followed by our master of ceremonies for the day welcoming us. The was absolutely packed, and I hear there were overflow attendees at the and even a nearby church. I would guess the seats 8,000-10,000 people, so one can say without too much controversy that the turnout for this gig was good. The master of ceremonies was the type you would expect at a seminar for business people, a young, blond (dark roots) photogenic lady with a dazzling smile who could probably sell icemakers to Eskimos. With a gush of praise and introduction, she brought to us the former governor of , Sarah Palin.
Whe 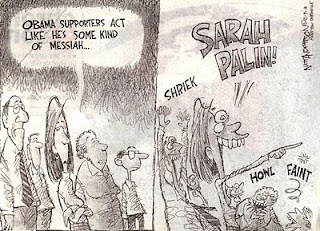