Post-World War II history documents the rise of two major world powers, complete opposites in political philosophy and ambition.  After 1945, the United States of America and the Union of Soviet Socialist Republics (USSR, or the Soviet Union, or commonly, Russia), once nervous allies in the battle against Nazi Germany, quickly became fierce competitors on the world stage for global influence.  The struggle became war-like in intensity, albeit without the usual firing of weapons, although there were many skirmishes along the way involving firepower.  The struggle became known as the Cold War, since actual combat between the two great adversaries seldom occurred.  Yet the underlying punching, counter-punching, feinting, and intrigue continued worldwide on a daily basis.  Although there was no combat, armies were in place, aircraft were loaded and ready for takeoff, and ships were armed and ready to fire.  Additionally, within a few short years after 1945, thousands of nuclear-tipped intercontinental ballistic missiles (ICBMs) were aimed toward each combatant by the other nation…all in the name of defense.  All that was needed was the command to attack.
In a twisted sort of logic, this mutual military standoff brought a measure of stability. There was a general philosophy referred to as "mutually assured destruction" (MAD) which preached the logic that, with the guaranteed assurance that both countries would be totally destroyed in the case of nuclear conflict, neither country’s leader would ever consider giving the “attack” command, and thus, to save one’s own country, one would not attack the other. This stable philosophy worked well except whenever one side perceived, either factually or otherwise, that the other side was gaining some sort of advantage which might tip the balance of power one way or the other. The results were the production of more weapons and more men in uniform.
When we review nuclear near-catastrophes during the Cold War Era, we normally think of the Cuban Missile Crisis of the 1960’s. However, it was in 1983 that the world teetered most precariously on the edge of nuclear holocaust. The fact that most of the events took place inside the Soviet Union has resulted in there being very little known about the events leading up to September 26, 1983. Much of the following information has been made available only since the fall of the Soviet Union and the declassification of CIA documents relating to the event.
In January 1981, Ronald Reagan was sworn in as president, and within two months, having run for election on a platform of “Peace through Strength,” he began his plan to strengthen the U.S. military. According to recent declassified CIA documents, in March 1981 Reagan authorized an expansive psychological program (PSYOP) for the military to “operate and exercise near maritime approaches to the USSR where U.S. warships have never gone before.” The operations continued into 1983 in what CIA documents called a “full court press,” using a basketball analogy.  In public, Reagan heightened his anti-Soviet rhetoric saying the Soviets “reserved the right to commit any crime, to lie, and to cheat” to promote world revolution.
As early as May 1981 at a secret KGB conference in Moscow, Soviet KGB head Yuri Andropov announced his view that the United States under Reagan's leadership had abandoned the concept of MAD and was actively pursuing a strategy of first strike against the USSR. As a result, Andropov formed a new collaboration between the KGB and the GRU (USSR military intelligence). This new arm, called RYAN, an acronym for Raketno Yadernoye Napadenia (Nuclear Rocket Attack), required agents to be sent worldwide to monitor U.S. military activities and report any signs of an impending attack.
On November 10, 1982, Leonid Breshnev died, and Yuri Andropov became General Secretary of the Communist Party. Andropov was a career KGB agent and one of the most virulent anti-western, anti-U.S. leaders in the USSR. He did not trust the outside world and was extremely suspicious of Reagan. Reagan’s continued military buildup reinforced Andropov’s conviction that the United States was planning a first strike against the USSR.
The tension was noticeably ramped up when in the spring of 1983, Reagan announced his Strategic Defense Initiative (SDI, soon to be called Star Wars.) Reagan himself had stated his revulsion for the general concept of MAD because it relied on trusting an enemy whom he knew in his heart he could not trust. The Soviets were thunderstruck, and four days later, Andropov publicly announced that the United States was actively planning a nuclear strike against the USSR and warned of the consequences. 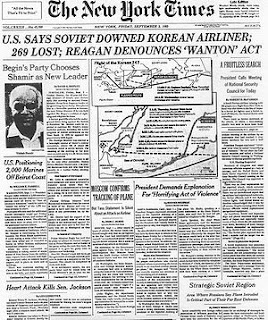 Early in the morning of September 1, 1983, Korean Air Lines Flight 007, left Anchorage, Alaska, en route to Tokyo and, for unknown reasons, flew over the Kamchatka Peninsula, USSR territory. Soviet MiGs were scrambled but had difficulty locating the Boeing 747 because Arctic storms had knocked out part of the Soviet radar system. KAL007 passed over the Sea of Okhotsk and over Sakhalin Island where it was finally intercepted by Soviet MiGs. Major Gennady Osipovich, pilot of the lead intercepting plane, identified the aircraft as having “blinking lights.” Interestingly, he stated later in his report that he “knew it was a Boeing aircraft because it had two rows of lights and it was a civilian aircraft.” Asked why he did not relay this information to the ground, he said simply, “They didn’t ask, and it didn’t matter. It would have been easy to convert a civilian aircraft to a military one” Osipovich fired two proximity-fused missiles, one of which exploded fifty meters from the tail, damaging the hydraulic system and penetrating the fuselage.   KAL007 began a 12 minute slow, no doubt terrifying, descent, eventually crashing in the Sea of Japan. 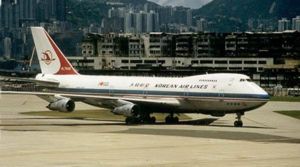 The shootdown of KAL007 brought worldwide condemnation to the Soviets, who made the mistake of stonewalling the event for four days. The Soviets finally claimed it was a military provocation, although the real reason for their quick trigger was probably because shortly before the KAL flight had passed over the region, a U.S. reconnaissance plane had flown over the same area, and the Soviets had been unsuccessful in intercepting it. To make matters worse, the Soviets had been planning a missile launch in the same general area for that same day and were already on high alert.
And then...on September 26, 1983, the United States attacked.  Just after midnight, Colonel Stanislov Petrov was sitting in the central defense bunker where the Soviet Union monitored its nuclear early warning satellites high above the United States. One of the alarms suddenly sounded and the red button on his console flashed “Start.” There was a report of one, then two, then three, then four, then five ICBM’s being launched from their positions in the United States toward the USSR. In an interview in 1999, Petrov reported, “For fifteen seconds, we were frozen. We could not believe our eyes.” At that point they were required to notify the warning system headquarters which would then have alerted Soviet Secretary Yuri Andropov. Petrov knew how Andropov would respond. Already highly suspicious of U.S. intentions, he would give the order to counterattack. In fifteen minutes from that time, the world would be destroyed.
Petrov made his decision concerning forwarding the information based on what he had been taught by his own military training. The concept of MAD had been thoroughly instilled in the military staff, with the expectation that any nuclear confrontation would be a total response with all weapons.  He observed, “When people start a war, they don’t use only five missiles.” Additionally, Soviet ground-based radar showed no signs of missiles on the horizon. He stated, “I had a funny feeling in my gut. I didn’t want to make a mistake. I made the decision (not to forward the information), and that was it.” In the end, the alleged missile launches were traced to a computer glitch. If Petrov had made the call, the world today would probably be far different from what it is.
Interestingly, years before this event, in 1966, to be exact, I was witness to a similar alarm. In my case, the tables were turned. I was at my post in West Berlin when radar reports came in of waves of aircraft flying toward our location. Coming from deep in the Soviet Union, the blips were identified as aircraft flying in formation headed straight for our border. Alarms sounded, messages were sent to headquarters in West Germany, and decisions were feverishly debated whether to contact Washington. We Russian linguists frantically attempted to locate any sort of Russian communications which would confirm the aircraft locations, but all normal Russian communication channels were silent.  The command was made...to wait.  In a matter of minutes, the planes reached us, hit the border…and disappeared from our radar screens. Within a short time came the answer…the radar system had somehow picked up some sort of signal “echoing” and multiplied the blips. False alarm, much to our relief.
On October 10, 1983, Reagan sat through a movie “The Day After,” a dramatic account of nuclear war graphically depicting the destruction of American cities.  In his memoirs he stated it left him “very depressed.” “I wonder,” he wrote in his memoirs, “how much reasoning can take place in six minutes in response to a blip on a screen?” The beginning of 1984 saw a softening of the Reagan rhetoric, and a Soviet official stated that it was “not necessary to over-dramatize a situation.” The U.S. and the USSR reopened talks concerning opening more diplomatic consulates and de-escalating the points of contention between the two countries.
And the world breathed a sigh of relief.