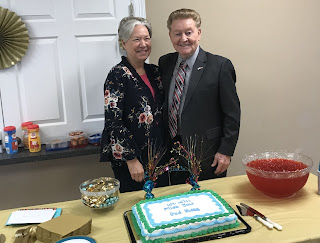 In the early years of our fifty-eight-year marriage, Shirley and I were wanderers.  Not aimlessly…usually with purpose.  We spent a few years in the military and then after college graduation worked for Sears, Roebuck and Company when it was the top dog in the retail industry.  With Sears during this period, any promotion meant a required move…so we moved.  In the first thirty years of our marriage, we moved twenty-seven times.  I will admit there may have been a tad of wanderlust evident, but usually each move was for a good reason.  It’s hard to believe now, but in those really early years (before children), Shirley and I could put everything we owned into our car…and head to the next adventure.


Because we were both children of devout Pentecostal parents, there was one constant with every location we moved into…we always found a local United Pentecostal Church to attend.  This was back when UPC churches had a common doctrine, a common standard, and a common spirit, and when we walked into a new UPC church, we were immediately surrounded with friends of like spirit and a surrogate home for us to enjoy.


The only downside to all this traveling, however, was when the time came to say goodbye.  It seemed that just as we were getting well acquainted with our new Pentecostal friends and ministers, it was time to move on.  The saying, “Parting is such sweet sorry,” may be true, but sometimes it’s just plain sorrowful.  We remember with great fondness many of our former pastors and church members we have had the privilege to meet along the way of life.


After we retired, moved away from our ancestral home of Baytown, Texas, and settled in our current home in Spring, we as usual settled also into our new church.  It is a far larger church than we have been accustomed to, but as time has passed, we have gained new friends.  Unfortunately, Shirley and I are also now at that stage of life when friends whom we have learned to love even since moving to Spring are suddenly being taken from us due to the advancement of years.  As a result, we value our friends more because we have become acutely aware that we have no promise of tomorrow.


Our church has a class on Sunday morning for all senior citizens over the age of sixty.  In the first couple of years after we arrived there was a potpourri of teachers who led our class.  Things did not really become established until the arrival of Reverend Carl and Sister Shirley Boothe.  The Boothes had been attending the church long before we arrived, serving in various capacities, but it was not until they assumed leadership of our class that their spirituality and influence came to the fore.


The story of their early years is the stuff of Pentecostal history.  Brother Boothe had been called to preach before they married.  They were married on one weekend, and they hit the evangelistic trail the next weekend…launching out into the ministry with only a calling to preach, a dream, and a wife by his side.  With no Bible college credentials, no parental influence to smooth the road ahead, and no backup financial plan, the young couple spread the gospel around the parishes of Louisiana.  Sister Boothe became a minister/teacher in her own right and together they have pastored, evangelized, and influenced a generation of Pentecostals.


When the Boothes became our Senior Class teachers, Shirley and I quickly began to appreciate their depth of spirit, teaching skills, and obvious concern for their class members.  Brother Boothe is a country boy who did well, and Sister Boothe is a gregarious city girl who says what she thinks.  They are a perfect match, and their team teaching is outstanding.  They are examples of true Christian holiness and ministers without reproach.


A few days ago, the Boothes announced to our class that they had felt the leading of the Lord to accept the pastorship of a church in Mississippi, and last Sunday we bade goodbye to our dear friends.  Though we are happy that they are following the leading of God, our hearts are broken because we will sorely miss their love, concern, and wisdom.  Over the years we have truly appreciated their phone calls, texts, and visits whenever they were concerned about our well-being.   I have said this jokingly more than once, “Whenever I get the sniffles, I can expect a phone call from Brother Boothe.”


The Boothes have been our valued friends and teachers, but more so they have been our pastors, perhaps not in an official capacity, but certainly in spirit and deed.  For many reasons, but especially as our pastors and counselors, we will miss them.  Shirley and I wish the Boothes every possible blessing as they begin a new, exciting chapter in their service for the Kingdom.  The folks in Pulaski, Mississippi, will soon realize how tremendously God has blessed their church with the coming of their new pastors.