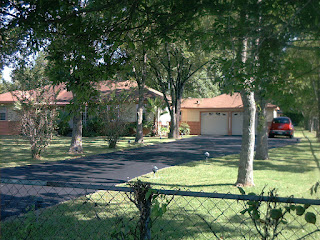 By the spring of 1953, with the arrival of Dad and Mom’s third child and my second sister, Kathryn, the decision was made to find a larger place for our growing family. The home on Hafer, though comfortable, was cramped, and Dad longed for some breathing room and a return to his farming roots. So they began looking at rural property outside of the city limits. To us city kids, driving through the countryside outside of Baytown seemed a whole new world, what with all the vacant land, barbed wire fencing, cows, horses, and space.
The first time we looked at 6134 Cedar Bayou-Crosby Road (sometime over the last fifty years the name has been changed to Crosby-Cedar Bayou Road), it was not a very impressive looking place. Situated on a dusty, shell road five miles north of Baytown, it was a model of Early Americana. I say this through the eyes of an adult, because it was, even in 1953, an old house…wood framed, wood shingle roof, three tiny bedrooms, and no bathroom…it had an outhouse. However, the present owner was in the process of adding two bedrooms and a bath to the house, so by the time we moved in the outhouse was gone. I remember being a little disappointed in that. Included on the six acres of property were a barn, chicken house, and a small garage or storage building. The barn was probably the best building on the place…a two story, sturdy, pole barn with loft and cattle feeding area, plus a granary (place where your stored your grain.) The chicken house was fully furnished for chickens…i.e., there were roosting areas, feeding and watering areas, and a fenced outside area for casual afternoon strolls. If you were a chicken, it was pretty nice. The storage building was basically a single garage, and eventually became the place where we stored our boat.
The yard area occupied about an acre of the property with the remaining five acres being pastureland. All of it was properly fenced in and ready for cows or roaming kids. I have said that the place was not impressive as viewed by an adult, but for us kids it was a grand new adventure. Miles of space to run and explore, a really cool barn, a chicken house, and tons of trees to climb…I mean, what more could a kid want? (Remember, this is pre-television and electronic stuff.) The only glitch that happened during the looking stage was on one of our early visits while the family was wandering around the house looking around. My little sister, Kathy, being a few steps in from of me suddenly stumbled to her knees. That was not uncommon, since she was only eighteen months old or so, but this time she let out a wail. I couldn’t figure out what the problem was and picked her up. When I picked her up, I noticed her right leg did not straighten out and, looking down, saw a roofing nail imbedded in her knee just under the kneecap. Without thinking, I grabbed the nail, which was driven into her knee completely up to the nail’s head, and gave it a pull, jerking it out. She REALLY let out a yell then, and I ran with her back to Mom and Dad and told them what happened. We hopped in the car, rushed to a doctor’s office, and she was given a tetanus shot and bandage. A few hours later, she was back to her normal self. After a couple more home visits, the farm deal was done. Dad and Mom paid $9,500 for the whole spread.
In the ensuing days, another tradition of years past occurred. As I said, the house was old and needed work, plus the new addition that the previous owner had begun was unfinished. The walls were sheetrocked but not textured or painted, and the exterior of the new area was not painted. The new area had roof decking but no roof. So on a couple of Saturdays before we officially moved in, Downings from far and wide came and in a matter of two or three workdays the wood shingle roof on the old area was removed, new decking was applied with a new shingle roof over the whole house, walls were knocked out inside the house resulting in three bedrooms and a much larger kitchen/living area, the bathroom was finished, and the outside of the house received new siding and paint. The women brought enough food to feed a small army. It was not a happy time for me because I was tortured. Well, at least I thought I was, since I was put to work pulling nails out of old lumber. There were so many cool things to get into, but I was anchored in front of a pile of old lumber and given a hammer. Looking back, that’s what I would have done to my ten year old son to keep him out of trouble while everyone tried to work, but I didn’t like it then. Anyway, in a couple of weeks the old house was transformed into a very presentable home, and it wasn’t long before we said goodbye to Hafer Street and moved into our new home. It was the Spring of 1954, and school was still in session, so for a couple of months, Mom drove me to my old school, Alamo Elementary, to avoid a mid-year school transfer.
Stra 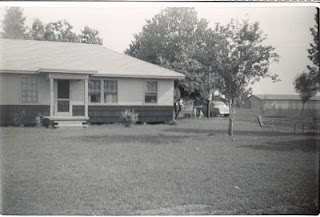 ngely enough, I have found no photos of this eventful period of my family’s life. The photo adjacent to this paragraph was taken in 1954, after the house had been refurbished, but before Dad built the double garage close to where the family’s 1952 Mercury is located in the photo. As far as I know, there are no photos of our old home in the original condition that Mom and Dad bought it. Probably just as well.
Once settled into our new home, we began the exploration. The barn became one of my favorite places. On the second floor Dad kept bales of hay…not the big round 1,000 pounders you see today, but the square traditional sized 60 pounders that were easy to stack. Dad would have them all stacked in a corner of the second level, but I discovered that I could take the stack down to a sin 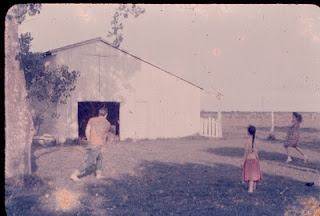 In Memory of Pastor V.A. Guidroz 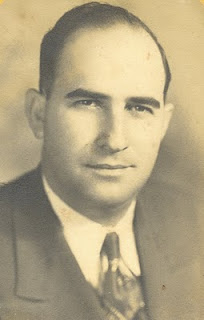