Return to Berlin
by Robert Downing
Any similarity to actual persons or events is coincidental. 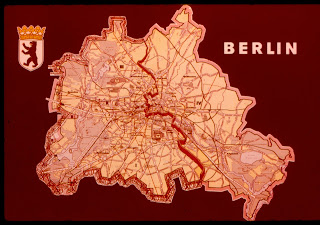 “Yes, Ma’am, thank you for coming to look at the home. It’s a beautiful home and priced right.  I hope you are able to make a decision soon.” 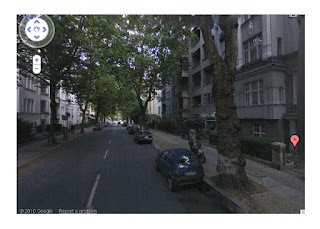 In a matter of a few minutes, he was in front of the apartment building he and his wife had shared in 1965 and 1966.  He was surprised how little the neighborhood had changed, although the Lebensmittel (neighborhood grocery store) next to their ground floor apartment had closed and the service station at the end of the block was now an apartment building.  He wondered if their German friends, Josef and Helga Yakowitz, still lived across the hall.
He instructed his driver, “Warten Sie heir einen Moment.”  (Wait here a minute.)
He walked to the former Yakowitz’s door and knocked.
The door cracked slightly, “Ya?”
“Josef Yakowitz?” asked Link.
“Nein, nicht heir leben.”
“Vielen dank,” replied Link and walked back to the taxi.
“Columbiadamm, Flughaven Tempelhof,” Link instructed. The driver adeptly maneuvered through the traffic on Hauptstrausse, turned onto Columbiadamm and shortly began approaching the massive building that is Tempelhof, at one time the second largest building in the world.
“Gehen sie nicht zum zivilen Flughafen, aber weiter aft Columbiadann vorbei am militarischen Teil,” instructed Link. ( Do not go to the civilian airport, but continue on Columbiadamm past the military portion.)

The driver did as told and Link was able to see for the first time the Air Force base which was Tempelhof.  He remembered where his room was which he shared with three other airmen in the months before his wife arrived and the months after his wife went home.  Most notably, however, he saw the entrance to the 6914th Security Squadron, with its forest of antennas bristling from the sixth floor roof, and he flashed back to the moments of boredom and sheer panic which that location afforded.  The 6914th was still an active unit, so Link was able to see a couple of airmen making their way up the stairs to the entrance. He longed to visit his old work rooms but knew he could never get in without major clearances.  He knew he had no “need to know” so a visit was out of the question.
“OK, driver, Berlin Hilton, bitte.”
In a matter of minutes upon arrival at the Berlin Hilton, he was whisked up to his room.  By this time, Link had been traveling and touring nearly 24 hours, and suddenly the weariness of travel fell like a heavy weight.  He collapse on the bed and drifted away.
He awoke to the sound of his bedside phone ringing.  For a moment he was confused with his whereabouts, but clearing his head, he answered the phone  “Hello?”
“Mr. Stevens?” asked a gruff voice.
“This is Mr. Stevens.”
“My name is Nikolas Krautman.  I am Foxbat12.  May I come up to your room?”
“Yes,” replied Link.
In five minutes there was a knock, and Link opened the door and greeted his Berlin contact.   Nikolas Krautman was a bear of a man, not tall but very overweight.  His earthen brown suit was ill-fitting, and his tie was not pulled up nor his collar button connected.  He wore a soiled fedora that had seen better days, and as he walked in, he wiped his forehead with a well-used handkerchief.  His facial features were weather beaten, with a crooked mouth and oversized nose.  In his mouth was a half-used cigarette.  “You have whiskey? “were his first words.
Thinking that maybe his guest had already had his share of whiskey for the day, Link replied, “Nope, no liquor; I just got here.  Have a seat.”
Krautman flopped down on the sofa which groaned under his weight.  Wiping his forehead again, he stated simply, “I have your itinerary here.”  He drew out a simple, single sheet of paper with times, locations, and further information about his long-lost great-aunt.  “You will leave the hotel at 7:00 tomorrow morning and take a taxi to Checkpoint Charlie.  Your documents are in order, but you need to be very familiar with them in case you are questioned.  The address you are going to is 27 Hellersdorfstrausse in the district of Falkenberg, in Northeast East Berlin.  The apartment number is 323, and your “aunt’s” name is Frieda Klammer.  You must be familiar with the information I am giving you about her in case you are questioned.
"You will greet each other with a joyous reunion and emotion in case someone is watching.  You will stay a minimum of two hours in her apartment, and then you two will decide to go for a walk.  You will walk about three blocks to Marzahnerstrausse.  Klammer knows where Morton’s apartment is, so she will guide you there.  Once there, you and she will visit Morton where you will do your duty, which is to convince Morton that his coming extraction back to the west is on the up and up.
“Once you are convinced that he is satisfied, you and Klammer will walk back to her apartment where you will visit for a short time and then leave.  Take a taxi back to Checkpoint Charlie and reverse your steps to get to the Berlin Hilton.  You will be de-briefed tomorrow night and Sunday morning you will fly back home.  Any questions?”
“No, it is clear.”
“One more thing.  While you are in East Berlin do not vacate the taxi for any reason except at your destination. If you attempt to converse with a stranger on the street and they determine you are an American, they will assume you are rich and have money.  Petty crime is rampant, and they will take everything you have, even some of your clothing.”
“I’ll be careful.”
“Good luck on your mission tomorrow.  Remember, stay alert and focused, and you’ll get back to the west in one piece.”
Link and Krautman stood up and looked at each other one more time, shook hands, and Krautman slipped out the door, leaving Link alone with his thoughts.
“Not much sleeping tonight,” he thought to himself as he began to review his instructions and the brief information on his long-lost “great-aunt Frieda."
Saturday, Day 3
It was a typically chilly November morning as Link exited the Hilton and waved down a taxi. The sun had not yet risen, and the air was damp with a threat of rain.  Heavy clouds were overhead and seemed to predict an ominous day.  The Mercedes 200 Diesel taxi clattered up to the curb and Link slid into the back seat. 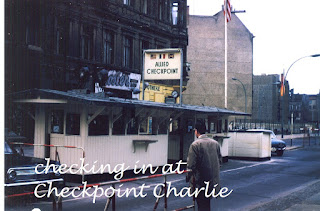 “Checkpoint Charlie, bitte,” Link instructed and the driver soundlessly shifted into low gear and moved away from the curb.

“Bist du ein Amerikanner?” asked the driver as he looked into the rear view mirror.
Startled for a moment, Link replied, “Yes, how did you know?”
“You have an American haircut and your clothes are not German.  Now I can practice my English.  Are you going into the East?”


“Yes, I am visiting an old relative,” responded Link.
“Be very careful, my friend.  The Vopos do not laugh very much,” warned the driver.
“I will do that.  My visit will be very short.  I will be returning this evening..”
It was only a matter of a few blocks from the Berlin Hilton on Mohrenstrausse to Checkpoint Charlie on Friedrichstrausse, but in that six or seven blocks, one appeared to travel back in time approximately 25 years to the end of World War II. The closer one came to the vicinity of the ignominious wall, the more decrepit and depressing the buildings became.  Buildings could be seen which had been destroyed due to Allied bombing or Russian invasion and had never been reclaimed, but rather stood as stark monuments to the destruction of war. 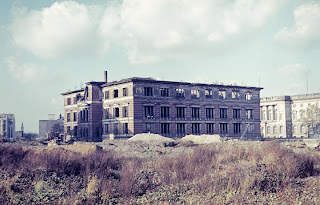 “Yes, of course. I will do whatever you request.”  Link responded.
“Good! Would you like some tea? We have a little time to visit. Tell me, what do you do for work in the United States? Do you have a family?
“I have a wife, a ten-year-old son, and my wife is expecting our second child. I sell real estate.”
“Real…estate…what’s that?” she asked quizzically. 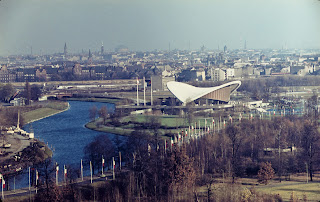 Driving toward the Wannsee District of West Berlin, the driver stirred Link’s memories with landmarks they passed along the way: the KongressHalle and its contemporary architecture, where Link had listened to Count Basie and His Band; the Kaiser Wilhelm Memorial Church, a destroyed reminder of the terrors of World War II; the glitzy Kurfurstendamm, where Link and his wife had strolled and window-shopped as poor enlisted personnel.  Entering the Avus Autobahn, the driver was able to pick up a little speed until exiting at Konigstrausse.  From there it was but a very few minutes until the shadowy form of the Glienicke Bridge began to take shape.
About a block from the entrance to the bridge, Link spoke to the driver, “Hor hier auf und warte auf mich.” (Stop here and wait for me.)
The driver replied, “Ich brauche zwanzig Mark fur die Ruckreise.  Yetzt.”  (I will need twenty marks for the return trip.  Now.) 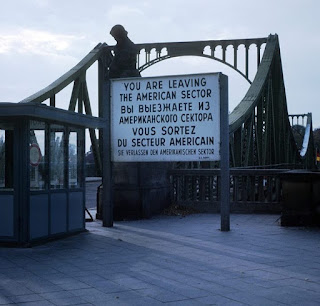