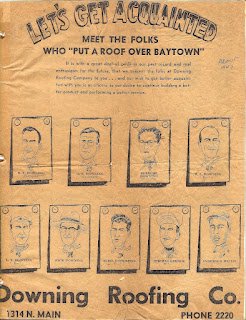 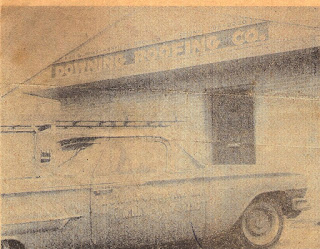 -bones half-ton six cylinder, three-speed Chevy trucks for years, the company bought a fancy Chevy El Camino for the “on the road” person to drive. The Baytown Sun even came by and took a picture of it (see poor quality photo from the newspaper). It was in the new metal building that I managed to fold the forks of a motorcycle back about 35 degrees when I was horsing around and ran into a stack of roofing. I myself hit the roofing but somehow bounced off unhurt, but my bike drove funny after that. It was also in this new building where I was one day loading sixty pound rolls of roofing felt onto a truck. I would place the rolls on the truck bed and a helper would roll them to the front of the bed and stack them. I decided to show my brilliance and amazing strength by picking up the rolls of felt, throwing them the 22 foot length of the truck bed, and neatly stacking them in a row. I did that for about 15 rolls when I felt something pop in my back and I went down. Three hospital days later and piles of x-rays confirmed I had collapsed a couple of vertebras. The problem still shows up in x-rays today. Well, I was impressive for fifteen rolls anyway!
1961 was a momentous year as Shirley and I married, and I started college with the idea of becoming an architect. Dad had always been on good terms with the main architects in Baytown at the time, Lowell Lammers and James (Bitsy) Davis, and Bitsy had encouraged me to get into architecture. I attended Lee College for a year, but in the course of events the architecture dream fizzled. I dropped out of Lee, and went to work for Downing Roofing Company full time. Somehow, it never fit, though, and I made the mistake one day of visiting an Air Force recruiter on a whim. It was a life changing event, and in August, 1963, I entered the U.S. Air Force. But that’s another story. When I told my crew members at Downing Roofing Company what I did, they proceeded to tell me every horror story they had ever experienced, heard, or, I suspect, imagine about the service. The told me never to volunteer for anything, keep my head down, and mouth shut (which, by the way, turned out to be good advice.) The last job I worked on was roofing Jimmy Carpenter’s home. He was a well-known fairly affluent barber in Baytown who was a world-traveling big game hunter whose barber shop looked like a animal museum. As we rolled that evening into the Downing Roofing Company storage lot and begin to disperse, each of my friends shook my hand and wished me well. I came home a few months later, and visited them again, but then the separation became years and I lost track of them. In the 70s and early 80s I visited occasionally, but by then many had moved on. In 1982, Dad had a debilitating heart attack and in a few months retired from the company, selling his share to Uncle Orville and his son, O.E. Jr. Some time thereafter, when Orville went into a rest home, O.E. Jr. closed Downing Roofing Company and moved to Austin. It was the end of an era.
Posted by Bob Downing