Many men (well, maybe most) have some sort of weakness which, should a temptation approach them that appeals to their innate psychological Achilles tendon, causes them to turn into weak-kneed bowls of jelly totally unable to offer any resistance. To some it may be the evil vice of booze, or smoking, or gambling…maybe even the irresistible attraction of the opposite gender.  But for me and a generation of kids who grew up in my era of youth, namely the fifties and sixties, it was the magnetic attraction of the American automobile. It’s possible that I inherited my addiction from my dad who loved cars and was a “Mercury man” for nearly thirty years, but whatever the source, by the time I turned twelve I knew the engine size, horsepower, weight, length, width, height, and color choices for every automobile manufactured for the current year by the Big Three (Ford Motor Company, General Motors, and Chrysler Corporation.)  Back in those days, most new model cars were introduced to the public around the first of every October. Shiny new models were well kept secrets, delivered to dealers while under heavy canvas hidden from prying eyes 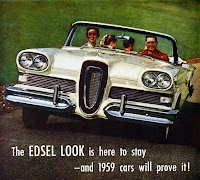 until the Holy Day of Revelation. On the Blessed Day there would be hundreds of people at the showrooms to see the latest offerings from the manufacturers. I have seen police at local dealerships directing traffic because of the demand to see the new models of various cars. Most dads took their sons to football games; my dad took me to every new car showing in Baytown. I was there the day the first 1958 Edsel was uncovered at the dealership on Commerce Street and heard a couple hundred people gasp at its radical styling. I had stacks of brochures and studied them thoroughly. I knew more about the cars than the salespeople did. Needless to say, I lived for the day when I could hear my own car keys jangling in my pocket.

That watershed moment occurred in the summer of 1959. I had just recently turned sixteen years old and, with the wisdom that comes to a young teenager, had been pressuring my dad for months to allow me to buy my own car. Looking back, I think I used many of the same sales closing techniques that in later life would help me to make a living as a professional sales person. Closing points like, “Dad, if I have a car, I can take my sisters to school, and they won’t have to get up so early to catch the bus!” and “Dad, if I have my own 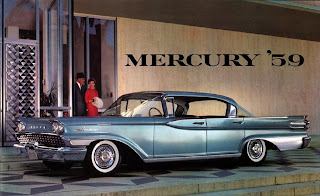 car, I won’t have to borrow your car when I go out on a date…and I’ll use my own gas!” Oh, I was good….and successful. When I had closed the deal and Dad had acquiesced, there was only one place to go…to the Mercury dealership. Dad had recently bought a 1959 Mercury ParkLane, one of the new “baby Lincolns” that Mercury was then offering (length 222.9 inches, wheelbase 128 inches, width 79.9 inches, weight 4550, engine 430 cubic inches, 345 horsepower…observed top speed 125 mph), and it never occurred to him or me to go anywhere else to look for a car.
There on the lot was a gorgeous yellow and black 1954 Mercury Monterey. Although it was a four door sedan and not a two door coupe, I didn’t mind. In a matter of minutes I was following Dad home in my very own car. My world had expanded to unlimited horizons as I took the giant leap toward independence. The fact that Dad had made me go to the bank and borrow the money and I was now saddled with a heavy car payment of $39.41 didn’t faze me. After all, I was working at Weingarten’s Grocery making $25.00 per week, so I had PLENTY of money! 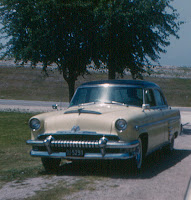 The only thing wrong with the Mercury was it didn’t sound good, and the sound of a car was very important during the Stone Age. I took the car to Creel’s Auto Parts in Highlands (future extended family member) and had dual exhausts installed with Smitty glass packed mufflers. There is NO sound like the deep (not loud) rumble of a four-barreled V8 American engine. Well, maybe a little loud is OK. There was a strip of North Main Street in Baytown, just north of Texas Avenue, where for about three blocks the sidewalks were narrow and the buildings were close to the road. Late at night if the coast was clear (you know…no cops, no traffic) I would turn onto that strip of road, floor the accelerator, and revel in the echoing thunder of those Smitties as the sound reverberated off the buildings. Cheap thrills. Of course, the Mercury did not have air conditioning and also had only an AM radio. So I did what a lot of young guys did in those days…I kept a bottle of Aqua-Velva in the glove compartment, and just before I went to the door to get my date (99.9% of the time it was Shirley), I would splash on a little dab to clear away some of the summer…um…heat. But actually, I did not miss the AC all that much. After all, no one had AC and as a result, most of us were much more acclimated to warm weather than we are now. My dad’s new ’59 Parklane was the first car my family owned with factory air conditioning, and I will admit that there were a few special occasions when I borrowed Dad’s big Mercury just so I could stay a little cooler. The ’59 Mercury was a world apart from my ’54…two feet longer, radically styled, and with TWICE the horsepower. Boy, that thing would run!…I mean…that’s what it said in the brochure, anyway. 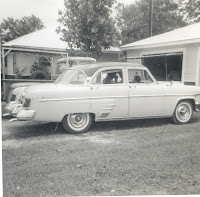 I was able to upgrade my radio with the first major improvement to radio sound during that era…the “reverberater.” This was a rear speaker with a sound delay that caused the sound from the rear speaker to emit just a split second after the front speaker. It created a cool, almost stereophonic sound sensation and was, in fact, the precursor to true stereophonic sound that was to come later. Trouble was, the reverb speaker had a mechanical device sensitive to road bumps, and once in a while I would hit a bump and the rear speaker would pop like a gun shot. It would wake you up if you were daydreaming while driving. Maybe it was a safety device.
The greatest feature about the ’54 Merc has become practically extinct in today’s mundane, cookie-cutter vehicles, and yet it was one of the most appreciated…the front bench seat. Even the ’54 Chevrolet Corvette had a bench seat in those days, and the idea of splitting the front seat into buckets was still a radical idea. There is no greater feeling of happiness and accomplishment to a young guy than to be cruising down the road with the glass packed mufflers rumbling quietly, and at the same time getting the occasional whiff of your girl friend’s cologne and feeling her presence as she snuggles up next to you holding your right hand while you drive with your left. And of course, if the car happens to come to a stop on a bluff overlooking Galveston Bay, and the moon happens to be rising, and a gentle bay breeze happens to freshen the air…well, all the better. I felt that rush of happiness about 55 years ago with a young lady…and today I’m still happily married to her. In fact, I’d buy another car with a bench seat today if I could find one.