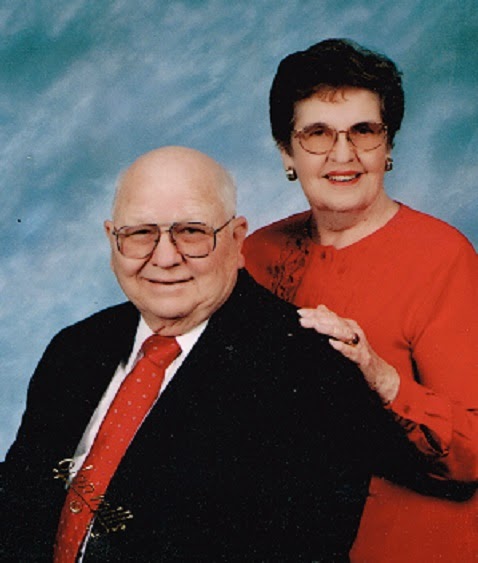 The Life and Times of Bobbie Nell Teer Creel & C.B. Creel
Bobbie:  January 1, 1934
C.B. :  June 2, 1933—May 24, 2012
Written by Bobbie Creel
My family moved to Baytown in the summer of 1948 when I was a junior at Cedar Bayou High School.  My sister (Claudine) and I both started practicing with the Blue Battalion, Cedar Bayou’s drill team.  When school started, I met C.B. for the first time.  He would come down the hall to meet me and he always told me to “straighten up and fly right!”  He was a sophomore, but a good football player, and popular with all the students.  He actually asked Claudine for a date first.  I ran around with 5 or 6 girls, and we would spend the night with each other, and since C.B. had a car, he would offer to drive us home after these sleep-overs.  He started taking me home last, and we got to be friends.  Then, on Halloween, he asked me to go to the movies, but I almost didn’t get to go.  We lived out on Tri-City Beach Road in the caretaker’s house at one of the big summer homes.  C.B. had an old car (coupe) with no floorboards and he brought a blanket because it was cold.  My daddy walked out to see his car and almost didn’t let me go with him.  C.B. used his key to start the car, then took the keys out and hung them on the choke knob so they wouldn’t jar out and fall through the floor.
Granddaddy Creel worked at Roseland Park, and C.B. worked for George and Jingles Smith’s Humble Service Station.  George and Jingles both drank.  Because C.B.’s car was very hard to start, he took one of the Smith’s old whiskey bottles and filled it with gasoline to pour in the carburetor.  He placed this whiskey bottle full of gasoline in the glove pocket of his car so that it would be available for every start-up.  Granddaddy Creel found the whiskey bottle in C.B.’s car and informed C.B. that he needed to talk with him.  C.B. had a hard time convincing his dad that it was only gasoline that was in the whiskey bottle.  Mr. Creel told C.B. that the seal on the bottle had not been broken.  Finally, C.B. was able to convince his dad that even though the seal on the whiskey bottle appeared to be unbroken, it was indeed an empty whiskey bottle that had been recycled as a gasoline supply for a cranky, old Chevrolet with no floorboard.