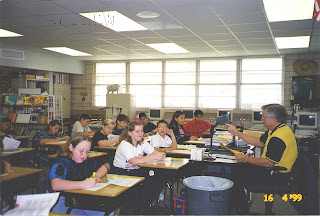 5:30 a.m…The alarm gently nudges the hand of Student 555-272-0894, awakening him to the rigors of another day. Knowing that his future in his Assigned Profession is dependent upon his performing at certain minimum levels of expectation, he quickly rises from slumber and slips on his school uniform and prepares for school. He is anxious to get to school because breakfast is there. Breakfast is a closely regulated ritual with each student’s diet closely monitored based on his/her physiology and metabolic requirements in order to stay within the weight limits required for Optimum Career Success. The stringent physical requirements for Optimum Success are a result of the wholesale failure of U.S. students in the early 2010s, when fifty percent of American students suffered from obesity and related respiratory and heart diseases. Physical activity at that time had degenerated in intensity due to the popularity of computer generated virtual activities, and the lack of caloric consumption coupled with greater food input created havoc with physical conditioning.

6:30 a.m….The School Transportation Module arrives, and as the student enters the vehicle, the Identity Verifier greets him in its monotone synthetic voice, reads the imprinted number implanted in the top of his hand, and prepares a review of the previous day’s studies on the vehicle’s student-specific Assignment Reinforcement Program.

7:00 a.m….Student 555-272-0894 leaves the Transmodule and is whisked into the Energy Accessorium via the conveyor-walk. There he sees his first fellow human, the Energy Dispensation Manager, dutifully handing out the energy packets in accordance with federal guidelines. Before he is given his food, he steps on a scale to determine his weight this morning and finds to his dismay that he has gained eight ounces above the Federal Acceptable Maturation and Mass Acquisition Standards for ten year old males. The EDM gleefully snatches back one five ounce packet of concentrated energy from his usual allotment of three packets.

7:20 a.m….The conveyor-walk transports him to the Physical Conditioning Area, where he and other early arrivals begin their morning conditioning rituals. He checks his Performance Chart on the large monitor to compare his progress to the rest of his class. Maintaining a success level in the top twenty percent of his class means he need not worry about a dreaded Mandatory Career Reassignment. Career assignments for early childhood began during the teen years of the 21st century when the United States economy came to a standstill due to a crippling lack of professional engineers, technicians, doctors, and mathematicians. The government began offering parents and their children financial stipends and hefty bonuses if children were steered into the professional careers that were in critically short supply. Each child was extensively tested, and if the potential for academic success appeared promising, parents were quick to sign a Professional Commitment Contract with the government. Their financial windfall assured, the parents worked closely with the Federal Emotional Counselor to instill in their child the will to succeed that was above the Federal Minimum Standards of Career Commitment. The parents’ enthusiasm was fueled by the knowledge that should their child be reassigned to a noncritical profession due to lack of commitment and failure to reach Minimum Standards, their financial windfall would have to be returned to the government.

9:00 a.m….From the Physical Conditioning Area, the student moves to the Data Access Area. There he finds his customary Cranial Interface Device, straps it onto his head, lies back in his Data Reception Recliner, and reads the menu for his first assignment. Social Studies is his first Learning Module, so he quietly speaks, “Activate,” and in a few seconds he is in a virtual world in the year 1836, listening to the shouts of General Sam Houston of the Texas Army of the Republic as he leads his men into battle at San Jacinto. Ahead, he sees the Mexican army sleepily awakening into instant panic as Houston’s men take them completely by surprise. The roar of cannon and musketry is deafening, but quickly dispelled with a monotonous voice from the Cranial Interface Device speaking, “End of lesson. State summary of events observed.”

10:00 a.m. -4:00 p.m…With the exception of a lunch period, at which Student 555-272-0894 is weighed again and issued an appropriate level of energy, he continues his work, observing virtual displays of science and natural laws, from walking on the surface of Mars and exploring the American mission there, to traveling through the bloodstream of a human being. He is asked to give his impressions of excerpts of poetry and to display his thoughts using the Cranial Evaluation Monitor. With his thoughts set to print, the CID matter-of-factly announces, “End of session…dismissed.”

5:00 p.m. -7:00 p.m…Aboard the Transmodule, the student arrives at his Assigned Dwelling. On the Virtual Display, his mother greets him, thought she will not be back from her assignment on the moon until next Thursday. Until then, her image will stay with him. He gets his assigned energy rations from the Energy Storage and Allotment Device and waves his hand under the Assignment Reassessment and Review Display. The room flashes with a review of the data presented to the student this school day.

7:00 p.m. -8:30 p.m…Having satisfied the Assignment Reassessment Program that he had retained above the Minimum Acceptable Level of Data Retention for the day, he receives permission from his Virtual Mom to engage the Simulated Personal Interacting Program. He asks the Dwelling Interface Coordinator Module to access the Superman program from the late 20th century. Popping on his own Cranial Interface, he lowers the face screen over his eyes, and for the next thirty minutes he is flying high in the sky as Superman’s right hand man.