A Tale of Nails 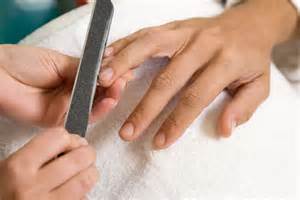 Somewhere along this time, she asked me if I would like a manicure to go with the pedicure, and honestly, at that juncture I would have agreed to about anything. With the manicure, just about everything which I described that occurred with my feet occurred to my hands and arms. I admit it…it was heavenly! At the end, I bade Ty (her name) farewell with the promise that, “Yes, I shall return.”
The only mistake I made during this whole pedicure/manicure episode was…I told a few people. Well, maybe more than a few, since I posted it on Facebook, so I know that at least my 21 friends are aware of it. But I fear that my manly, masculine, macho image has been damaged forever. I want to set my friends’ fears at rest, however. I may not drive around with a set of horns on the front of my car anymore, or I may have forgotten a few batting averages or names of NFL players. The Rockets or Astros or Texans may not interest me as much as before. I may not go fishing or hunting as much as before. I may not know or care as much about guns or fear Obama as much as you do. I may not talk about my wife in disparaging terms as much as you do (and you know who you are…). BUT I am still a man and am willing and anxious to do man stuff as often as possible.
Well...except Thursday mornings….that’s my pedicure time.
Posted by Bob Downing