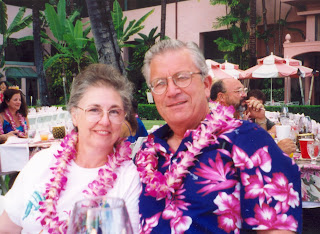 Shirley and I have enjoyed vacationing in Hawai’i. We have been there five times and have learned that the proper spelling for “Hawaii” is “Hawai’i.” There are many parts of the world which are touted as places of paradise (and we haven’t seen them all), but the Hawai’ian Islands are our benchmark until something better comes along. This short essay will not be a travelogue, but rather a recounting of an incident which happened in “paradise” which is a little funny now, but at the time created a few tense moments.
On our third trip to Hawai’i, our base of operations was our timeshare condo on the island of Maui. On our first trip to the islands, we were captured outside our hotel in Honolulu one evening by a slick talking salesman, given the timeshare condo sales pitch, and fell for it hook, line, and sinker. It actually worked out pretty well. We used the condo on our next three trips and in the years we did not travel to Maui, we were able to easily rent the condo to someone else. Anyway, one thing that Shirley and I enjoy doing is snorkeling, and Hawai’i is a snorkeler’s dream. The water is clear, the coral is magnificent, and there’s an abundance of marine life. One of our favorite places to go is Molokini, which is a crescent shaped uninhabited island about fifteen miles off the Ka’anapali coast. Charter boats take loads of water soaked tourists to this island, where they drop anchor, and the tourist jump in and snorkel and dive to their hearts’ content. It is a gorgeous spot.
On this particular Molokini trip, we rode to the site in a forty foot cruiser sponsored by the Pacific Whale Foundation. These people are extreme conservationists to the point that their boat runs on used cooking oil instead of diesel or gasoline. They make regular visits to all the restaurants on Maui to collect their used oil and use it to power their boats. Probably explains why everything smelled of fried fish (not really.) The guides on these trips are very knowledgeable, and by the time you get to the dive site, you want to go hug a shark. They are very dedicated to the ecological well being of the ocean. These Molokini trips usually begin about 8:00 a.m. with arrival at the dive site usually around 9:30 to 10:00 with a little meandering around to look at dolphin and other ocean life. A couple of hours of diving there, then it’s another excursion around the backside of the Molokini volcano to a place on the southwest coast on Maui called Turtle Bay, for obvious reasons once you get there. Lunch is cooked and served while at anchor, then it’s another couple of hours of diving before heading back to port. 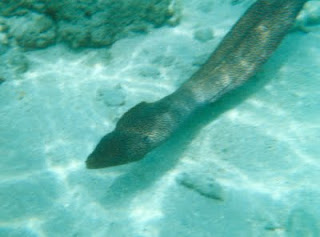 So, on this particular morning while we were snorkeling at Molokini, Shirley and I had been in the water for an hour or so looking at the clouds of fish. Shirley likes to meander along just under the surface with her breathing tube safely out of the water, while I like to dive down to the coral in the 15-25 foot deep water to investigate whatever might catch my eye. Moray eels and other varmints like to hide in the coral, and it’s neat to see these creatures in their natural habitats. Anyway, I would do my thing, diving down here and there, while Shirley would paddle along on the surface. When I decided to surface I would look up and could usually spot her bathing suit so I could get back to where she was.
This one time I went down because someone had yelled there was a small shark cruising around some of the coral, and I spent fifteen minutes or so seeing lots of creatures but no shark. No, I did not stay underwater for 15 continuous minutes. A snorkler dives, stays down as long as possible, surfaces, gulp some more air, and re-dives. When I gave up on the shark and decided to surface, I looked up, and sure enough, there was Shirley paddling along, and I guess, since shark was on my mind, I decided to do my shark imitation as I cruised up toward her. I floated up underneath and behind her, reached up and gave her a …um….pinch of a personal nature that a husband might give a wife if you catch the drift. She jumped and turned, but I dove instantly and got away. I snorkeled elsewhere for about five minutes and then surfaced to look for Shirley. No Shirley anywhere. I swam around for a few more minutes, and then I spotted her back up in the boat. Well, by this time I was getting tired, so I climbed aboard and sat down next to her. “Did I scare you?” I asked with an apologetic look on my face. 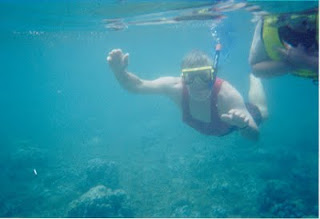 “What are you talking about?” she replied with a puzzled look.
“When I came up behind you and pinched you.” She looked at me with a blank look.
Suddenly a great horror flashed in my mind. “How long have you been back on the boat?” I asked her.
“About 30 minutes…I got cold!”
At that moment the realization that I had pinched the wrong woman hit me like a bucket of cold water. I could envision the next scenario. A flustered lady would come out of the water, point at me and yell, “There’s the sick pervert! Somebody shoot him!” And next to her would be her husband, a former World Wrestling Federation champion, six feet, five inches and 290 pounds, walking toward me and growling, “I’ll handle this, Baby!”
For the next few minutes as everyone reboarded the boat in preparation for leaving, I spent a lot of time looking in the opposite direction of the boarding ladder and studying the boat deck. Any second I expected someone grab my shoulder and make all sorts of accusations. I kept a VERY low profile the remainder of the trip.
But, you know, I got to thinking about it later, and who knows? I may have made some woman’s day a very special day. I can just imagine some lady getting on the boat, looking around, and upon seeing me trying to be invisible in a corner, graciously walking by while thinking to herself, “I’ll always wonder what his name was!”