A Day on the Farm

The morning dawned warm and dry, and by 9:00 a.m. the temperature was already creeping into the upper eighties. Although it was only the first weekend of June, 2011, nature had already proclaimed to Texas that this was going to be a scorcher of a summer. During April and May, the Houston area had received a half inch of rain, only five percent of the normal rainfall for the area, and drought conditions were already becoming prevalent. A couple of weathermen had already only half jokingly stated that what we needed was a good old tropical depression to stir the weather up a little and bring rain. Usually, the news of a new tropical depression was enough to get South Texans to checking their hurricane survival gear, but in early June, it’s not even hurricane season yet…so we sat and baked in the sun.
This particular Saturday was a special day for a select group of members of Bethel Tabernacle Pentecostal Church of Houston. The Senior Class of Bethel’s Sunday School (and I do mean “senior” i.e...members 55 years or age or older) had been invited to the farm of Max and Jeanette Haney (members of the select group themselves) for an afternoon of fun, fellowship, and, most importantly, eating. Bethel Tabernacle is blessed to have a very vibrant group of seniors. Shirley and I are newcomers to Bethel, having attended now for only a couple of years, but already we feel we have known these people for years, and they have become our dear friends. These are people who have been through the wars, facing health issues, tragedy, death, and every other facet that life can throw at a person, and they have emerged stronger and still possessing a positive outlook on life and its challenges. Their faith in their God is not based on the emotion of the moment or the tempo of a song, but runs deep, and their friendships to one another remain strong. Pardon me if I throw out a little prejudiced opinion here, but if there exists a group which is the cornerstone of the church, this one’s it.
Anyway, the Haneys had figuratively thrown open the door of their farm to our group, and the plan was for everyone to gather there around 2:00 p.m. Our hosts had graciously offered to prepare a late lunch for us, while various ladies would bring tasty desserts, and Shirley and I would bring the obligatory iced tea, water, and soft drinks. We had planned to use the church bus to carry any car-less people, but everyone seemed to prefer to drive their own wheels, so the bus was unnecessary. We did have three people who needed rides, so we decided Shirley would pick up the hitchhikers (we had no choice…one was my mother-in-law), and I would drive my car. I wanted to leave a little early anyway to try to get to the Haneys early enough to help them do whatever setting up they needed to do for about 32 hungry people.
Leaving my home about 11:30 with two ice chests full of various chilled liquids, I headed east on FM 1960, then north on Hwy 59 toward the outskirts of Cleveland, Texas. Being an old guy, excuse me…mature guy with visions of a lost youth, I had recently bought a ’97 (obviously NOT new) Ford Mustang GT convertible and was anxious to see how it did on the road. Unfortunately, it was too hot to put the top down, but at least the AC worked well since the temperature had now climbed to the mid 90s. I was happy with the old car but a little disappointed that the tires are not too well balanced above 120 mph. The Haney farm is a few miles southeast of Cleveland in an area that I remembered as a youth as Tarkington Prairie. Years ago, when I worked with my dad and his company, Downing Roofing Company, we did a lot of roofing in the Cleveland area, and as I drove through the old part of Cleveland, I recognized some of the older buildings as places where I had sweated many a drop of sweat. Motoring south on 321, then left on County Road 2274, followed by a brief stint of driving brought me to the Haney farm. 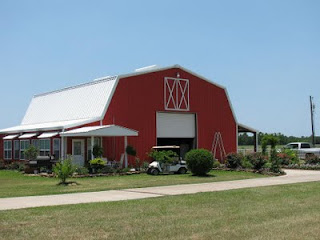 I had heard the Haneys lived on a farm and actually lived in their barn, so I was touched when these poor people offered to be hosts for our little group. When I was growing up, we had a barn, and I envisioned having lunch in a run-down batt and board barn with metal roof, hay loft, tractor parking area, cow stalls, granary for feed, and the general smell of, well, a farm. As I approached my destination, I began to realize that barns have apparently come a long way since my days of stacking hay bales in our barn back home. What I parked in front of was not a barn from the 1950s.
The Haneys have seventy acres of beautiful farmland, flatter than a billiard table. Facing the road is a wooden fence painted in a brilliant white. The “barn” qualifies as a barn, I guess because it looks like a barn and because you can drive a tractor through it due to the large power garage doors front and back, and there is a tool and storage area. Painted the traditional red with white trim, this “barn” features all the trappings of a beautiful home right down to the granite kitchen counter tops. It is a lovely residence. I decided it would probably not be necessary for us to take up a collection for the Haneys so they could make it till the next crop comes in. Their farm comes completely furnished with a great garden, a lake with dock and stocked with fish (too hot to fish, though), truck, tractor, genuine country farm animals like cows, horses and chickens, even a neighbor dog…and everything is beautifully detailed and neat.
I had arrived an hour and a half before the festivities were to begin, but the Haneys were way ahead of me. We would be dining in the open area of the barn, with the large doors fore and aft opened about halfway to allow for a breeze to waft through the area. Although the temperature for the day, we learned later, hit 100 degrees, it was not uncomfortable in the big barn with its tall ceiling. Tables, chairs, utensils, and ice had all been prepared, and about all that had to be done was prepare the main course…which was fried shrimp. The fact that we were having fried shrimp was enough to draw me to t 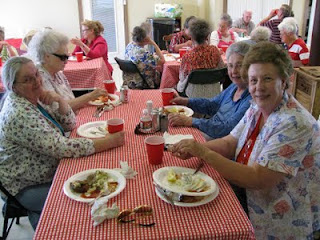 he gathering no matter what else took place. Brother Haney, of course, had his own way of frying the shrimp using a propane cooker, and I can tell you this, he cooked a lot of shrimp and what was left after everyone had finished you could have put in a half pint plastic bag. We were all stuffed…but happy.
Around 2:00 folks began gathering, and the lunch of fried shrimp, baked potatoes, and slaw went over like American flags at a Glenn Beck rally. To say we had desserts does not do that fact justice, neither does saying that we had cakes, pies, and assorted pastries. When it comes to cooking, and especially baking, no other group holds a candle to a bunch of Pentecostal women. One may say without fear of contradiction that we all dined sufficiently.
I had brought my fishing gear and looked wistfully at the lake behind the barn as I imagined several hungry catfish or bass awaiting my hook, but around the lake (or large pond) were no trees, 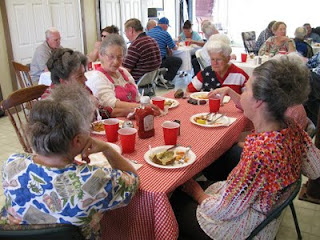 and it was just too hot to go out and stand in the blazing sun. Maybe next time. There was a large bull out there that I could have probably sat in its shade to fish, but it probably would have moved, anyway.
By 3:30 or so, most of the food had been consumed, but the conversation was just getting started. I have mentioned before that Shirley and I are relative newcomers to this group, but it was evident that many of these people measured their friendships in decades, not just years. Rehashing events that occurred 50-60 years ago was common, and I could sense the easy, comfortable relationships that these people enjoyed. There was more than one rememberance of t 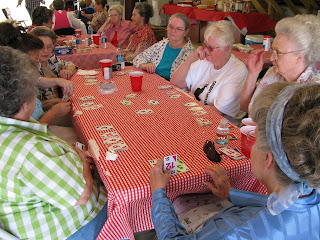 he days of youth, and I tried to imagine how each person may have looked when they were young, strong, and powerful. I began to realize that in many ways our minds do not age, only our bodies, and though we may change physically as the years go by, our relationships with our friends can remain constant. Long term, true, loyal friends keep us young.
When the women began breaking out the games, I knew we were in for a long evening, and sure enough, before long the dominoes and cards were a-flying, and deep, ulterior strategies were being concocted to insure victory in these mighty struggles. When I was a kid, the entire Downing family practically w 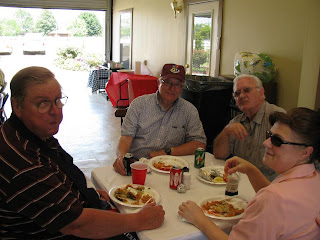 as a master of the domino game of “42,” but I have played only occasionally. I knew I was in over my head when I sat down with Jim and Pam Bailey and Alvie Bounds for a friendly game of “42,” and they started throwing out different strategies, plans, and options. Whenever I laid down a domino and saw Sister Alvie wince, I knew I had played the wrong one. But we had fun. Between gaming, snacking on leftover desserts, and chattering like a bunch of magpies, we managed to fritter the afternoon away until it was past time for us to be heading home. The party was to have ended at 5:00, but nearing six o’clock we were still breezing along. About that time, however, an unseen signal was sent out, and we bega 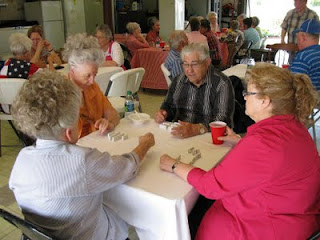 n to clean and pack up our gear and prepare for departure.
Shortly, most of the refuse from our visit was stuffed in the trash bin, and the barn had been restored to its pre-invasion condition. Cars began to slip away through the gate, and before long Shirley and I gave our respects to Max and Jeanette Haney and aimed our cars toward home. This day had been a good day, thanks to the generosity of the Haneys and the lovely ladies who spent time baking the wonderful desserts. I’m glad I’m a part of the Seniors of Bethel Tabernacle, Houston, Texas.
Posted by Bob Downing