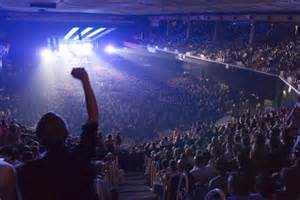 We entered the large auditorium well before the time the special events were to begin, but the musicians were already preparing for the evening’s activities.  The dimly lit stage was prepared as one would expect…heavy dark curtains accented with blue backlighting.  Electronic gear was everywhere, dominated by the sound system featuring speakers with blue lighting accents and the capacity to split an eardrum at 200 yards.  In anticipation of the coming live music presentation, a soundtrack was playing featuring the popular music of the day, replete with canned enthusiastic roars from some appreciative audience from a concert gone past.  In a few minutes, the musicians themselves began firing up their basses, keyboards, and drums in anticipation of the night’s work, and the singers began to assemble and review the procedures for their performances.
By zero hour, most ticket holders had taken their seats, and the musicians had found their places, At the stroke of the appointed time, the master of ceremonies blasted the audience with a confusing blend of a welcome to the show and a call to arms…all at maximum decibels.  According to him, this was not an evening to sit back and enjoy the show but a time to jump, shout, yell, clap, and show unbridled enthusiasm for the message about to be delivered.
For the next 40 minutes, our ears were assaulted with a cacophony of deafening thunder blended with various unintelligible voices, accompanied by the master of ceremonies constantly bantering the audience to get more actively involved.  These were the “warm-up” performers…those whose job is to get the audience into a festive mood before the headline performer comes on stage.  The music ranged from hard rock, to heavy metal, to blues, to soul, to ghetto rap, with the crowning achievement occurring when a young African-American, dressed stylishly casual and wearing either shades or highly reflective glasses, began rapping in both Spanish and English. By the time the young rapper had wrapped up, the crowd had been deemed properly primed for the main event.  And up to the microphone the main attraction strode….a minister.
What I have described up to this point is not what you may have imagined the event was.  I have not recently gone to any concerts featuring the great musical groups of the day.  The event which I described above was an officially sanctioned church conference sponsored by the , International.  I purposely chose not to identify the location of the “conference” nor the main participants because it is not my intention to throw rocks at or embarrass (if that’s possible) any particular persons or churches.  What I have described above is probably representative of hundreds of assemblies, services, and conferences which are becoming highly prevalent in modern society and in our churches, and so what I am reacting to is a movement, a direction, which I see the UPCI heading.
Pentecostals for decades have followed the biblical mantra for the church of “be ye separate.”  I will be the first to admit that we have in the past sometimes taken that philosophy to the extreme, and alienated people unnecessarily with our separatist, “holier than thou” attitude.  However, I am willing to argue the point that the pendulum has now swung far to the opposite side, and we as a church have now adopted the strategy of  “to save them, you’ve got to be like them.”  It does not mesh with the message that we thankfully still hear from our pulpits.  Our ministers hammer away with the message that when a person is saved he/she becomes separate from the world and a “new creature in Christ.”  However to entice the unsuspecting souls into our church, we show them that we can be just as cosmopolitan as they in our choices of music, just as disrespectfully casual as they in our choices of church clothing, and just as worldly as they in our level of conversation.

Today, when listening to allegedly Christian music via radio, television, CD, or, regretfully, churches, someone with the ability to filter out the words and listen only to the music would be unable to distinguish the sound…and the spirit… from any other rock, country, popular, alternative music source available, and yet, music itself projects an attitude and can be a stimulus for physical action.  Accomplished musicians know this and use this tool to excite an audience…and the spirit of God can be a million miles away from the action.  But the people are moving around, and that’s what the objective is…get them moving.  There is a growing group of churches and musicians who confuse this musical stimulus as “worship.”
There was a time when a church…or as we pompously like to say occasionally, “the house of God”…was more than a simple building but was considered a place of respect and shown such through our entrance of its doors with a quiet, reverent attitude and in our manner of dress.  We spoke quietly and entered prayerfully, while dressing modestly in our most dignified and reverential clothing.  The building, after all, was “the house of God,” a place of spiritual refreshing and encouragement.  Today ministers and saints take great pride in casual, “down to earth” attire.  Ministers preach from the pulpit and musicians strut across the rostrum in jeans, tee shirts, and sneakers, all in an effort to “make the church more accessible to the masses.”  Yet, our manner of dress reflects our level of respect for ourselves and for others, including the church.
Want to know what the latest NFL or MLB scores are?  Want to know how the local Little League team is doing?  Most frighteningly…want to know what the latest Hollywood blockbuster movie (probably R-rated) is like?  Just hang around the vestibule of one of our churches just before church time and you’ll probably get your answers.  You will hear very little discussion of the upcoming church service.  Churches have learned the lingo of the lost…and through their embrace of conversations not relative to salvation, have given church visitors the message that a church membership does not require a change of spiritual heart…nor speech.
Sadly, this “be like them” strategy is promulgated by the very people who preach against it…the pastors, and it is done so with the most selfish of reasons…simply to build church numbers.  Pastoral competition is alive and well in the 21st century, and the top dog is the guy with the biggest church.  As it has been since the beginning, we equate success with numbers.  The next morning after the above mentioned service, I happen to be at a table enjoying breakfast when I overheard two pastors talking at the next table from me.  These two men are probably considered “bright stars” in the UPCI realms, having started churches fairly recently and shown a tremendous level of success (numbers, again.)  What caught my ear was what one said to the other, “Everything we do in our outreach is geared for the ages 17-25.  It’s the group you can have the greatest success with.”  In two sentences, the pastor explained the entire strategy for church growth which appears to be nearly universally adopted by UPCI churches.  It explains the music, dress, and attitude of new converts. It also explains why mature, older, devoutly Pentecostal adults leave church services unfulfilled and frustrated, having received no spiritual food for the soul, and perhaps also why older members have a tendency to drift from church to church, seeking a level of worship which is on a somewhat higher plane than a Justin Timberlake concert.