Many men (well, maybe most) have some sort of weakness which, should a temptation approach them that appeals to their innate psychological Achilles tendon, causes them to turn into weak-kneed bowls of jelly totally unable to offer any resistance.  To some it may be the evil vices of booze, or smoking, or gambling…maybe even the irresistible attraction of the opposite gender.  But for me and a generation of kids who grew up in my era of youth, namely the fifties and sixties, it was the magnetic attraction of the American automobile.  It’s possible that I inherited my addiction from my dad who loved cars and was a “Mercury man” for nearly thirty years, but whatever the source, by the time I turned twelve I knew the engine size, horsepower, weight, length, width, height, and color choices for every automobile manufactured for the current year by the Big Three (Ford Motor Company, General Motors, and Chrysler Corporation.)  Back in those days, most new model cars were introduced to the public around the first of every October. 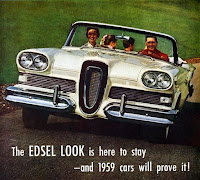 Shiny new models were well kept secrets, delivered to dealers while under heavy canvas hidden from prying eyes until the Holy Day of Revelation.  On the Blessed Day there would be hundreds of people at the showrooms to see the latest offerings from the manufacturers.

I have seen police at local dealerships directing traffic because of the demand to see the new models of various cars.  Most dads took their sons to football games; my dad took me to every new car showing in .  I was there the day the first 1958 Edsel was uncovered at the dealership on  and heard a couple hundred people gasp at its radical styling.  On the day the 1964 Ford Mustang debuted, I had to park blocks away from the dealership and had to wait several minutes before I could even get inside the dealership due to the crowd of gawkers.  I had stacks of brochures and studied them thoroughly.  I knew more about the cars than the salespeople did.


The 1950s were the golden age of the American automobile.  Unrestricted by oil limitations, gas prices, EPA mileage requirements, or federal guidelines, and blessed with highly imaginative stylists with carte blanche to design the dream car for the masses, the American automotive industry created some of the most distinctive, outlandish, and memorable automobiles in the history of transportation.  Each major brand of automobile boasted a distinctive profile (’59 Cadillac fins!) that made each model recognizable from any reasonable distance and generated an owner loyalty to the marques which is distinctly absent in today’s market.  Automobile manufacturers of today, encumbered by EPA mileage requirements, high energy prices, safety regulations, international competition, and globalization of the markets are forced to create generic cars, predictable in design, uninspiring in appeal, and indistinguishable  from competitive brands.  Ninety percent of automobiles on the road today would be unidentifiable if viewed from a shadow profile.
Please note that up until this point I haven’t mentioned quality of product. Whereas the fifties set of wheels glittered with miles of shiny chrome, glass, and rainbows of colors, the standard warranty was 90 days or 3,000 miles, and extended warranties were unheard of.  When an automobile hit 70,000-80,000 miles, it was usually time for a major engine overhaul, and brakes and tires were worn out in well under 25,000 miles.  The American auto industry had not yet discovered the value of building a quality product; their specialty was building a car which would blind you with its styling and make you not even care about the expensive upkeep.  Today’s cars, however bland and styling deficient they may be, far outshine their ancestors in durability and safety.  Unfortunately for today’s manufacturers, the first reaction to practically anything comes from a visual impression, and the cars of today just don’t get the blood churning like their predecessors.  A prospective buyer in the market for a new car today has precious few choices if he/she is looking for a car with distinctive styling.  A budget Toyota Corolla or luxurious Infiniti look the same from a hundred feet away.  Even the so-called SUVs so prevalent today have degenerated into an indistinguishable pile of mediocrity with each manufacturer unashamedly copying their perceived competitors’ products.  The creative, bar-raising, boundary-busting automotive model is nowhere in sight.  I had high hopes for the Tesla, the new all-electric luxury vehicle created by an individual (wealthy) genius unrestricted by the closed culture of the automotive giants, but the finished products of his creation have all the styling excitement of a bar of Ivory soap. 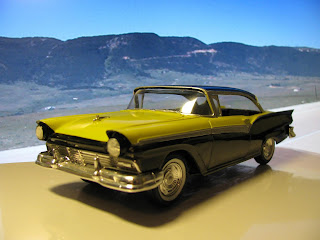 However I may moan and groan about the state of the modern automobile, it hasn’t stopped me from buying them.  Since I drove my first 1954 Mercury off the lot in 1959, I have been privileged to own 139 different vehicles…a total of 33 different brands, foreign and domestic.  Granted, I have slowed down recently to about a car or two per year, but back in the earlier days, I apparently was seeking the Holy Grail of automobiledom and therefore had a tendency to look longingly at different models on a somewhat regular basis. 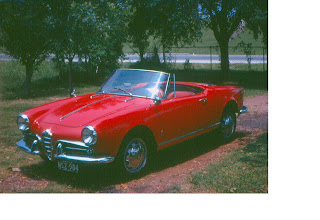 I have always liked two-seater sports cars, preferably with convertible tops.  I’ve never been much of a truck person.  Why anyone would drive a bloated, ungainly, inefficient, tank of a vehicle that handles like a tugboat and weighs about the same is beyond me.  You need it to carry stuff, you say?  I read recently that of all the trucks sold in the today, over 60% of them are never used for hauling anything. Truck manufacturers have done a masterful job of relating truck ownership to manhood, so “drivin’ mah one-ton dooley” satisfies the macho male ego more than anything else.  I realize that some trucks are used for work, but otherwise, why own one?   I was hooked on sports cars after I bought my first one…a 1961 Alfa Romeo Spider Veloce.  It was a red, high-revving Italian job with double overhead cams and Weber carbs back when most American iron was just discovering overhead valves.  It could turn on a dime and give you a nickel change.  I taped a microphone back near the rear wheel, turned on the recorder, and went screaming around corners while going up through the gears and listening to the tires screech.  Afterward, I played that tape over and over at home.  Cheap thrills.  In later times came eight MGs, a couple of Triumphs, and even a Fiat  X1/9 (the only car I would not drive anywhere without my tool box.) 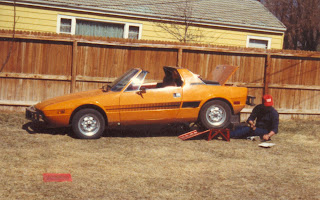 One of the coolest cars I ever owned was a 1981 Gazelle, a 1929 Mercedes SSK fiberglass kit car built on a Ford chassis.  I didn’t build it…it was professionally built and beautiful.  Used to have girls follow me in their cars wanting to go for a ride.  Since I wanted to avoid any marital stress, I eventually sold the Gazelle.  One of the quickest cars I ever owned was a 1968 American Motors AMX, a two-seat sports car built by for a few years.  Small, light, with a 390 V8 and four-speed, it would scream through the gears.  It wasn’t much on stopping though…this was before disc brakes came along.

One of the prettiest cars I ever bought was a new 1979 Chevy Monte Carlo…one of the first models with glass T-tops.  It was a beautiful car, but even in during the summer the glass roof let in way too much heat.  Looked good with the glass roof off, though.
I got interested in Saabs for a few years and owned four.  Saabs were built by weird Swedish engineers and were a little quirky.  The company was purchased by Chinese interests in 2012, and the cars lost their individuality.  The ignition key was in the middle of the console between the front seats.  But a Saab drove and handled like a sports car, and it was one of the first manufacturers to offer turbocharged engines.  They were very quick for the time.  However, they were a little problem-prone.  Son Bobby drove one from to the and had car trouble driving south, while he was in going to school, and on his way back north to .  It was so expensive to fix, I once flew down to , fixed the car myself, and flew back to …all cheaper than it would have cost us at a Saab dealer in .  When he got back home, I bought him a new Honda…end of car troubles.
I’ve owned some cars that I thought were ahead of their times…a 1968 Renault 10 and a 1980 Nissan 310GX.  Small but comfortable, both cars consistently obtained 40-45 mpg…but nobody cared because gas was $0.30 per gallon.  Then I’ve also owned vehicles that were at the end of their lifetimes, namely six Jeep Wagoneers.  Not the baby ones you see today, but the large, Suburban-style, full time four wheel drive behemoths that were the workhorses of .  It was impossible to stick one in the snow.  They went everywhere. 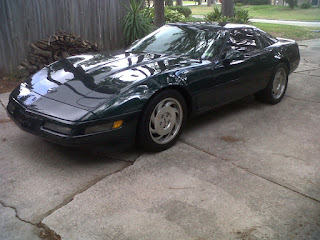 There was one car I had never owned but had always interested me.  So, having entered my declining years of senility and common sense, I had an opportunity to trade my 97 Mustang GT convertible for a Corvette.  It wasn't new by any stretch…a 1996 model.  In auto sales parlance it would have been described as “honest.”  Very clean, very original, no body work, good leather, 89,000 miles, removable roof panel, and ran like nothing I had owned since the AMX.  I hunted for reasons to take it for a drive.  Unfortunately, after owning the 'Vette for a couple of years, I had to let it go because of a hip replacement.  'Vettes are not that easy to enter, anyway, and with a bum hip it because untenable to own.  I traded it for a new Kia Soul.

You know you have reached old age when you 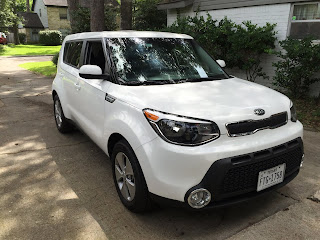 trade a Corvette for a Kia Soul, but the Soul was an amazing little car....roomy, comfortable, efficient, and dependable as a Maytag appliance.  It was the perfect suburban car, although about as exciting as that Maytag appliance I mentioned.  I drove it for a couple of years and sold it.  Tired of car payments.
On some future day I’m sure that I will hang up my keys and reserve the Senior Citizen bus for my travels.  But until then, I’ll still be collecting auto brochures and reading car magazines.  I'm driving a Buick Rendezvous, but now, with a new hip and pain-free mobility, I'm starting to check the ads for a nice clean, low-mileage Corvette.  Who knows, exciting times may yet return to my garage.

by Robert Downing Any similarities between actual events or persons living or dead is purely coincidental. Chapter One       Air ... 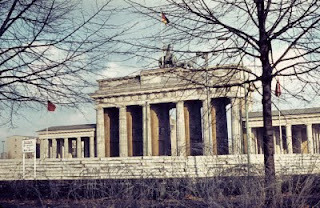