The month of May always brings with it two momentous events: my birthday (May 5) and the annual Men's Conference of the South Texas District of the United Pentecostal Church, United. Held in San Antonio around the first weekend of the month, the conference is a gathering where men of like-minded faith can get together and share a common spirit, gain strength and encouragement, and renew a commitment to God.  I have written previously of high moments (See https://bobdowning.blogspot.com/2015/05/mens-conference-2015.html ) and low  moments (See https://bobdowning.blogspot.com/2013/05/the-concert.html ) in the conferences, but the positives far outweigh the negatives, so it was with anticipation that we group of old veterans headed west toward the Promised Land again on Friday, May 3. 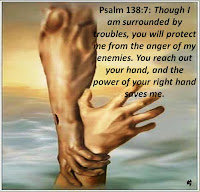 As usual, and for the fourth time in the last seven years, it was Brothers Jerry Steward, John Cook, and me in Brother John’s venerable Honda Pilot…and as usual, we left Houston after having breakfast at our favorite Denny’s Restaurant…the Denny’s where we have enjoyed breakfast every Friday for the last five years.  The place where, when we walk in the door, the coffee is already at our favorite table, waiting for our first sip.  They take care of us; they should…we tip pretty well.
Unfortunately, we were missing Brother Prentiss Smith, John’s father-in-law, who backed out at the last minute for undisclosed reasons.  I’ve said it before…it’s always good when you’re in the company of Brother Smith because he is a man of such impeccable character that some of his respectability sort of rubs off on common old church members like me.  However, this past year Brother Jerry Stewart was chosen as a certified board member of Bethel Tabernacle, and, with John Cook already being a board member, I am still surrounded by Men of Impeccable Character…I couldn’t sin even if I wanted to.
Anyway, we left Denny’s under threatening skies which opened up as we headed west on Interstate 10.  From Katy to Columbus, it was heavy rain and dark clouds, but as we sailed by Columbus, the weather began to lighten and we made an uneventful trip to our destination, The Drury Hotel at I-10 and Loop 1604 in Northwest San Antonio, arriving around 4:00 p.m.  Jerry and I shared a room, and John was left out in the cold, all alone.  He had to wing it alone in his room because his father-in-law had backed out.  I offered to get an extra bed in our room, but he declined…probably because I had told him Jerry snored like a freight train…or at least, someone in our room does.
Drury offers free evening and morning buffets, so downstairs we went after the obligatory naps for some tacos and salad.  They were not five-star tacos, but they were sufficient for the moment.  While we three were dining, Pastor David Fauss came in and joined us for a bit of conversation.  In his new position as Superintendent of the South Texas District, he was constantly being tapped on the shoulder by passersbys who wanted to say hello.  Such is the price of fame and responsibility.
Brother Fauss is the newly elected superintendent of the newly formed South Texas District.  Actually, the name is the same as before, but where the South Texas District once ranged from Beaumont to Brownsville, it has now been split roughly on a line from Austin to San Antonio into the South Central District (San Antonio to Brownsville) and South Texas District (east of that line to the Louisiana border.)  I can’t give you the exact boundaries because no one knows what they are; the boundaries have never been published, documented, or publicized.  The UPCI, from its national headquarters to the local church organization, is highly secretive.  If you read Pentecostal Life, the official publication of the UPCI, you will read wonderful inspiring sermons and testimonies, but very little about the administration of the organization.  The local and state districts carry on that policy.  The original South Texas District, which split from the original Texas District, has now been split into the aforementioned two districts, and rumors have abounded as to the reasons for the action.  Nowhere can you read or hear of the new boundaries or the reasoning for the divide.  The pattern of non-information is carried to the local churches.
About 7:30 p.m., the lights of The Hope Church, Rev. Scoggins, Pastor, dimmed and the service began…or rather, the show began.  There was suddenly a cacophony of rolling drums, blinking lights, wailing keyboards, and blasting voices, accompanied by flashing psychedelic images on two large screens.  Someone needs to watch the Michael Caine movie The Ipcress File (1965).  In that movie, those same procedures were used as torture for captured prisoners in an attempt to break down their resistance to questioning. It was standard questioning procedure during the Cold War period of the fifties and sixties.  To complement the entertainment, there was also the obligatory lead singer yelling at the top of his/her voice.  We also received a heavy dose of good old Christian rap (that is an oxymoron, my friends).  However, I am not going to dwell on this negative aspect of the conference; I have made my opinion known before (see above blog “The Concert,”) but I will make this one statement and use a term I have heard two ministers use recently; albeit, they were using it in reference to the world. Pentecostal music has gone to hell in a handbasket.  The music may bring in people, but it destroys the spirit and cheapens the church experience.  ‘Nuf sed.

We were blessed to have as our main speaker, Brother Stan Gleason, who is the Assistant General Superintendent of the UPCI, Western Division.  He preached an outstanding sermon concerning the role of men in the church and the responsibilities we have as men to represent Christ and the church.  It was powerful, positive, and inspiring, and most of us wound up somewhere around the altars reconsecrating ourselves to the work of God after the sermon.
There is an unwritten rule amongst Pentecostals…after church…we go eat.  Fortunately, in the Drury Hotel complex is an Applebee’s, and that was and is our usual stopping place after service.  By that time, we had other great friends join us, Brothers Melvin Hogan and his son and Carl Boothe…who is more than a brother. Brother Boothe is a minister and leader/teacher of our Senior Bible Class at Bethel Tabernacle.  We had a great visit at Applebee’s, and it was after midnight before we left the restaurant, primarily because Brother Hogan can eat more…and slower…than any person I have seen recently.  But it was OK.
The next morning, bright and fairly early, we were downstairs for the Drury breakfast which was full course and pretty tasty.  We made it to the church about 9:00, and, thankfully, the weather had brightened considerably after yesterday’s rain and storms.  Revs. Donnie Huslage and Roger Blackburn preached briefly but eloquently on the subject “Men at the Gate.”  Then it was time again for Brother Gleason.
Brother Gleason’s sermon that morning was worth the $50.00 price of the conference.  His subject was “Be Famous with your Family!”  His most noteworthy statement to our group of men was,” If you have to choose between saving your church or saving your family…save your family.”   He used examples of ministers who are so wrapped up in building churches, they neglect their own families, and men who try hard to provide for their families, yet they forget their families’ spiritual welfare.  “Do not be afraid,” he said, “to say ‘I love you’ and ‘I’m sorry.’”  The sermon created some serious soul-searching and re-committing among many listeners.

Shortly after noon, John Cook headed the Pilot back eastward toward Houston.  We had one more obligatory stop to make: at Chili’s in Seguin, Texas.  The food is good, and we were ready to eat, but it’s the chocolate volcano dessert which made me want to make the stop.  If you’ve never had a “chocolate volcano,” it’s a big chunk of fudgy chocolate cake (hot) with a great scoop of vanilla ice cream on top. Chili’s chocolate volcano is huge and comes with 3-4 spoons, depending on the number of participants.  Sadly, another memory has been tarnished a bit.  This time the cake was not very fudgy…more like a regular lightweight chocolate cake.  It was OK, but you didn’t get the usual chocolate overload with each bite.
After one more brief stop for fuel, John delivered Jerry and me to our respective homes about 5:00 and another enjoyable conference was in the books.  Next year, the two now-separate districts will each offer its own men’s conference, so whether we ever return to the Drury Inn or San Antonio is unknown at this time.  Personally, I enjoy the trip traveling with my good friends nearly as much as I enjoy the conference itself.  The idea of driving across Houston to a conference is not as appealing.  We’ll see.
Posted by Bob Downing