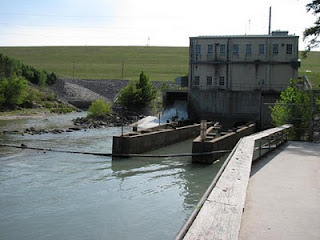 This story is mostly true.....

A few days ago my family made our annual trek to Canyon Lake in the Hill Country of South Central Texas. It is a tradition began by my son and his wife and our grandchildren a few years ago when the allure of Schlitterbahn, a water park in New Braunfels, Texas, became too great. Once the joys of paying exorbitant prices to splash in water with thousands of other people under a blazing sun became apparent, it quickly became an annual affair. The fact that there were Canyon Lake, a scenic man-made water paradise nearby with boating, the Guadalupe River with tubing and rafting, and shopping with scads of antique, junk, and outlet stores around added to the charm of the area. Not to mention that nearby was one of the premier barbeque restaurants of Texas, so there was the opportunity to enjoy quisine magnifique, also. In time, they set aside a week of each year to bask in the local culture and in general have a good time relaxing.
Since our family, thankfully, gets along pretty well, we oldsters were invited to tag along, and for the last three to four years we have done just that, usually not staying the entire week, but getting in three or four days of fun and visitation. Son and family stay in a high-fallutin’ upscale time share condo while we poor senior citizens fend for ourselves, usually locating a nearby motel to be within driving distance of our kids. It’s a nice arrangement and very enjoyable. In the past, we’ve been able to hop into a single vehicle and head for our destination of the day, and we often share breakfasts, lunches, and dinners as the opportunity arises. The normal weekly schedule calls for a couple of days at Schlitterbahn, one day renting a boat on the lake, one day shopping, at least one evening at Salt Lick Barbeque, one day of wandering around the area, and a day or two of…well… nothing. Sometimes you need to rest up from having so much fun. This of course is the schedule for the week, but since Shirley and I don’t spend the full week there, we sort of jump in where ever the schedule is at during the week and tag along. In the vernacular of the contemporary, it’s a very bonding experience for the family…plus it’s just plain fun.
My only problem is the Schlitterbahn ordeal. It seems that the older I get I am becoming more…..well…anti-social. It’s not that I’m really anti-social; I just don’t care to be around hoards of people. And hoards of humanity are what you get at places like Schlitterbahn. To top it off, at Schlitterbahn, people are not really at their best, appearance-wise…and sometimes behavior-wise. I have gone there a few times with the family, and I used to be concerned about how I looked. It pains me to say this, but I’m getting a little older now (cough) and don’t really have a buffed physique like I would like to have when I stroll around in a swimsuit (with a teeshirt). But after visiting Schlitterbahn a few times, I can walk into the park with my head held high without any concern of some little kid telling his mama, “Hey, Ma! Look at the funny-looking man!” Believe me, it is a fact that no matter how bad you think you look, you will find at least ten people in the park who make you look like a health fitness freak…and they seemingly are proud of how they look!
So anyway, this essay is not intended to knock Schlitterbahn. I actually sort of enjoyed my visits there. It’s just that my interests tend to drift to the more quiet and restful…like fishing. I am not a lake fisherman, I prefer rivers and streams. More specifically, I prefer fishing in cold, fresh water rivers and streams for rainbow and brown trout. I have caught catfish, walleye, perch, panfish, drum, redfish, snapper, gar, even shark, you name it, and to me they’re all about as exciting as catching a log. I was able to do my share of trout fishing when we lived in Wyoming, but naturally here along the Gulf Coast of Texas, fresh water trout are a little scarce. Amazingly, here in the Houston area the officials are dumping trout in some of the local small lakes during the winter season when the water is cold enough and allowing fishermen to go after them for the two or three weeks that they are available. On the days of the trout planting, the lakes are lined shoulder to shoulder with wannabe fishermen. Snared lines and frayed tempers are the standard for the day. It ain’t really fishing. I have fished for speckled trout in Galveston Bay, and they’re a lot of fun to catch, but a fisherman needs a boat and a certain amount of mobility to track them down.
Up until now, the closest place I had found to Wyoming fishing was, believe it or not, Branson, Missouri. There, amongst the glitter of gaudy country shows, rests Table Rock Lake, a large man-made lake formed with the building of Table Rock Dam back in the fifties. Being a lake, it doesn’t really interest me, fishing-wise, but below Table Rock Dam, it’s another story. The water that flows from Table Rock Dam comes from the bottom of the lake, probably at a depth of 100-150 feet, and is very cold, in the mid fifty degree range…perfect for rainbow and brown trout. The water stays cold for 10-12 miles downstream before eventually warming up to a non-trout-habitable temperature. There is a trout hatchery at the base of the dam which keeps the river well stocked with trout. The “river” is actually called Lake Taneycomo for the twelve mile stretch below the dam, but it’s really just a nice sized river. Out of Lake Taneycomo I have caught some beautiful trout using the same fishing gear I used in Wyoming.
Whi 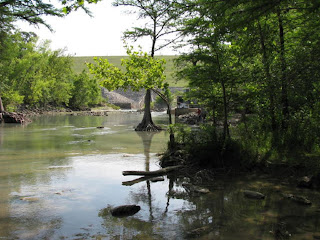 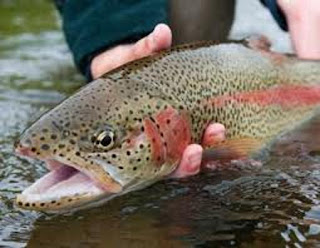 He was the most beautiful rainbow trout I had ever seen. Massive in size with the trademark rainbow colors down the side. He was called in these parts a “holdover”…one of the fingerlings planted in the river several years earlier which had somehow survived countless fishing days and hungry predators. In the left side of his mouth I saw the remains of a small rusty hook, a souvenir of a past battle. Though tired from the struggle, he gasped for water, and strangely, he appeared to look at me. His eye seem to communicate a resignation that he had lost the conflict against a worthy adversary, and he was ready to meet his fate. There would be no more battles. As I held him in from of me, I saw him for what he was…a survivor in a world of endless struggle, who had given his all and was now resigned to his judgment.
Using a small pair of needle nose pliers, I gently remove my fly, and then reached to the other side of his mouth and removed the remains of the old hook. Holding my hand under his belly, I eased the big trout back into the water and gave him a few back and forth pushes to get water moving into his gills again. He moved slowly, tiredly, but then he deliberately moved away about six feet and circled around back toward me. For an instant he stopped, facing me, as if to say, “Thanks, Friend!” and then, with renewed strength, he turned quickly to the left and disappeared in a stream of bubbles.

I gathered up my gear and walked to my car. I’m not sure if I’ll ever fish again.
Posted by Bob Downing