This was our rented villa on St. John. Perched high on a hillside overlooking Great Cruz Bay, it offered a breathtaking view with a d 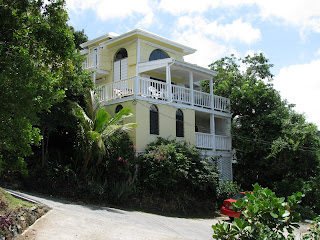 ash of comfort. It was a two unit affair; we had the lower section. The hardest part was getting to it. The road was extremely steep, and the steps which you can't see were just as steep. It was a bit of a chore for us more mature folk. Shirley and I held hands more than we ever have since we were newly married, but this time it was primarily for stability. All these steep slopes were hard on us flatlanders. The windows were all shuttered and easily opened to catch the sea breezes, but we, being Houstonians, used the AC at night.


The view of Great Cruz Bay was most impressive, and made for a nice view as one nibbled on an island breakfast de 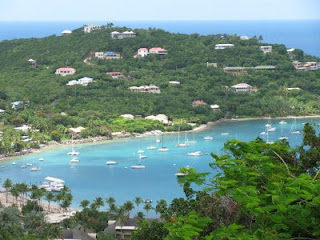 licacy: Chocolate Chip Pop Tarts with coffee. Far below us was the very uptown Westin Luxury Resort, where us commoners were not allowed, although there was (I understand) a lot of gate crashing to enjoy the Westin's beach, shopping, and restaurants. We never went there; I figured if I wanted to be overcharged for something, I could do that in Houston. Most of our time on St. John was spent enjoying the natural beauty, which was incredible. 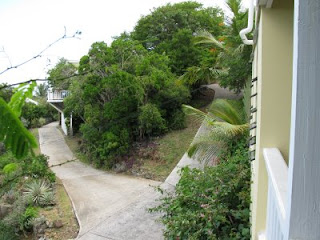 If you look at a St. John map you see "roads," but this is an example of a road on the island. Basically a driveway. This road up to our villa was so steep I could not really gun the engine too much or the front wheels would lose traction. And where you see the "road" turn to the left in the photo, it was even steeper! 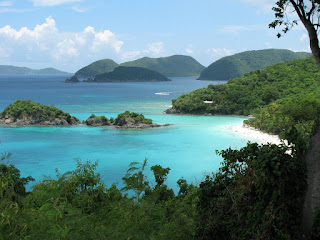 The beaches were natural masterpieces of the Creator's art...beautiful white sand, warm, clear water, bright sunshine, flora, fauna, coral, fish, fresh air, and....iguanas. Iguanas are sort of island pets, and are bold as brass. They will eye you as you have your picnic lunch, though they are insect eaters and apparently don't care for bologna. They can grow to longer than four feet, and, if you're not into big lizards, they can startle you. I can't believe I didn't get a photo of one. This photo is of Trunk Bay on the north side of the island. It has an underwater guided tour that snorkelers can use to identify fish and coral. We snorkeled around both sides of the island, observing octopus, moray eels, sting rays, and many varieties of reef fish. I think I have a photo of a barracuda, but it was a little far off to positively identify. 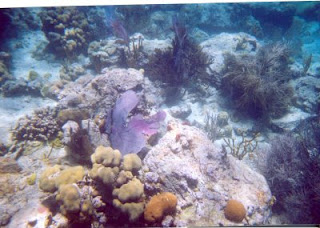 The coral around the island is identified fairly simply: whatever it looks like is the way it is described, i.e... fan coral, califlower coral, grass coral, antler coral, etc. Swimmers and coral do not get along well together. The most popular beaches had the most evidence of swimmer abuse. Swimmers and snorkelers seem to have an irresistible urge to touch the beautiful coral, which becomes a death sentence for these creatures. Further away from the pockets of people, the coral was more colorful. The cycle of life was very evident, however, as one could see new coral sprouting up from areas where the dead coral had become stone.