Lonely, But Not Alone

The Seaboard World Airways Boeing 707 whined expectantly at the edge of a long ribbon of concrete stretching into the distance. The night air was chilly and damp, normal in the month of January in the coastal region of . The year was 1965. Jammed inside the silver fuselage were over 250 military personnel and dependents, most of whom had waited nearly a full day to board the aircraft bound for . From front to back there were no sectional dividers, and from my vantage point near the back of the plane, the rows of seats seemed to stretch to infinity in front of me.
With the blessing of the control tower, the 707 surged to life with a mighty roar, and we were pressed against our seats as the silver bird strained to gain speed and break the bonds of gravity. Many of the small children, not familiar with the routine of flying, began to cry, and every mother went into “assurance mode” to attempt to quiet the youngsters. Moderate success.
In the d 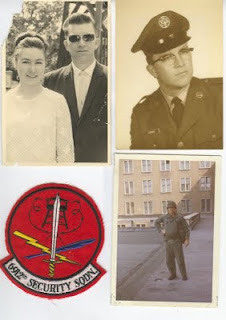 arkness of the night, the lights of sparkled like diamonds as we gained altitude, but as we banked to the northeast and out over the , the vision outside our windows became a black screen. As we approached our 35,000 foot cruising altitude, the smokers fired up their instruments (smoking was allowed back then on planes) and succeeded in turning the aircraft’s atmosphere into a hazy cloud. Though I tried to rest, the smoke, the crying children, and the occasional turbulence created a fitful nearly nine hours of flight, culminating in our landing at around the next morning.
As soon as we walked off the plane, the first thing we had to endure was an hour lecture about “culture shock,” but, as tired as we were, nothing our new culture had to offer could have shocked us. My plane into was not scheduled to leave until the next morning, so I went to a sleeping barracks to try to finally rest.
But in the stillness of the darkened room, I couldn’t sleep. I felt more alone that I ever had in my life. Thousands of miles away from my wife, family, and friends, my two year tour of duty seemed to stretch a lifetime in front of me. As I lay on the cot staring at the ceiling, I questioned every decision I had made which had put me in this far away location. I felt isolated and not a little defenseless.
Loneliness can occur, however, when one is surrounded by thousands of people. We are told that depression, lethargy, and other emotional ailments can be the result of our feelings of loneliness and isolation. We sometimes fear to share our innermost feelings with others because long term relationships seem more difficult to establish in our helter-skelter world. Our friends of today can become our adversaries of tomorrow.
In the midst of this uncertainty, we can be reminded of the beauty of a close relationship with our Creator. In a world of confusion, He offers a foundation of permanence. His protection and closeness follow us wherever we go. In the darkness of a transient barracks, I breathed a prayer and felt His comforting presence. Jesus said it best in Matthew 28:20:

“Lo, I am with you always, even to the end of the earth.”