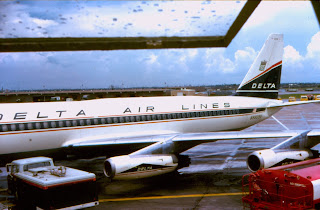 The businessman was a bundle of taunt nerves as he approached the airport terminal for his first airplane ride ever. His fear of flying had kept his feet firmly on the ground his entire life as reflected in his oft-repeated mantra: "If man was meant to fly, he would have been born with wings." The impersonal check-in, complete with x-ray and wanton waving of weird-looking wands by wooden security people, contributed to the gnawing knot in his stomach. Walking toward the loading gate he froze with fear when he saw the final indignity….a machine was hawking flight insurance! "They don't think we're going to make it, either!" his panicked mind told him.
Walking into the plane, he felt the silver tube shrinking around him. A stewardess spoke, "May I get you anything?" All he heard was, "Now we've got you!" The engine whine became a crescendo of screams as the plane lurched down the runway. He was convinced that the plane was rolling over on its back as it raised its nose skyward and clawed for altitude. Pressed back into the seat with his fingers dug into the armrests and sweat dripping off his nose, he could only condemn himself anew for ever agreeing to this terrible torture.
As the plane leveled off in flight, however, a strange event occurred. The ride became amazingly calm. He looked around, and his fellow passengers seemed relaxed, and the stewardesses appeared quite friendly. After a few minutes his tension began to wane, and visions of tragedy began to fade.
"I'm gonna make it," he happily told himself.
He accepted a cup of coffee and began to look about the plane as he sipped the brew. He was almost content. He glanced out his window, however, and saw a strange sight. As he looked at the engine, a small spark of flame suddenly flashed and then a steady stream of fire began to spew out the rear of the motor. He knew something about welding and said to himself, "That fire's gonna eat a hole in that wing and its gonna fall off and this plane's gonna fall and it's not gonna be good!" Scared….panicked.
Pandemonium exploded as the pilot announced emergency measures and stewardesses began preparing for who knows what. The little man, who had all his successful life been in full control, now felt helpless. He had never been one to go to church, but he now uttered the first prayer he had prayed in years. "Lord, please help me!  Just get me off this airplane and I'll give you half of everything I own!"
Instantly and miraculously, the fire gave a last cough and disappeared, and the plane settled down as smooth as could be.  In a few minutes the pilot had the plane safely back on the ground, and the little man was walking back into the terminal as happy as a dog with a bone.
Right behind the man walked a minister who had heard what he had prayed on the airplane. "Hallelujah, Brother! I heard what you said on that airplane!  I heard you say you were going to give half of everything you own to the Lord!  I just know you want to start right now!" And he held his hand out expectantly.
"Naw, I made a better deal," said the little man.
"You what?!" replied the minister.
"Yep! I told Him if I ever got back on another plane, He could HAVE IT ALL!"
Have we ever asked God for a favor and made a promise to Him at the same time? "Lord, if you'll do this for me, here's what I'll do…." And then God fulfills our request, but somehow we, in our excitement of receiving our request from God, forget what we have promised to Him in return. Help us to understand that, just as His promises are sure, so should ours be. A promise kept, whether with God or our fellow man, will result in future blessings in our continued walk with God.
Posted by Bob Downing