A Tribute to Ethel Downing

﻿﻿
March 7, 2022, marks the 105th anniversary of the birth of my mother, Ethel Mai (New) Downing.  Although it has been eighteen years since she left us, I still think of her often, especially when I observe the condition of the office of motherhood as practiced by the general populace. From what I see, a conclusion can be drawn as to the cause of the many social ills being suffered by this generation. The major contributing factor to the degeneration of the family unit is the woeful lack of mothers of the stature of my mother.  In most cases today, the office and responsibilities of motherhood have been relegated to the back burner by the contemporary feminist, and though having produced through biological process a child, the duties required to nurture that child to adulthood are neglected.  Careers, personal satisfaction, and feminist peer pressure command greater attention and emphasis than mundane motherhood. 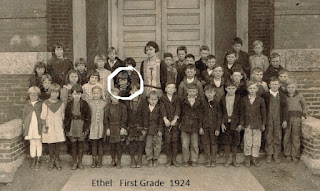 Born on March 7, 1917, into a large family (five sisters and three brothers) of modest means, she lived most of her early life in Shawnee, Oklahoma. Although the family struggled during the Great Depression following the market crash of 1929, her father managed to work during the entire financial crisis as an engineer for the local railroad.  However the pressures of providing for his large family caused him to begin drinking, and he eventually became an alcoholic who took his frustrations out on his family. Mother told me that when her dad would come home in one of his moods, she would hide her brothers and sisters in her bedroom until he fell asleep on the couch.  One of her brothers (my uncle) told me that Mother was the only one of the children who would stand up to their father and would not allow him to roar at her siblings.  He also told me that eventually a grudging respect between father and stubborn child grew to the point that he would not press my mom to "bring out those kids so I can see them."   To complicate matters her mother contracted breast cancer, and in those years before proper treatment and surgeries, she became bed-ridden for the last two years of her life. 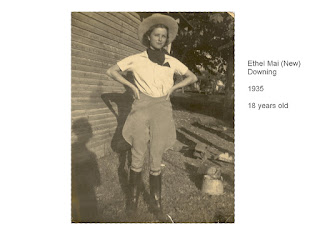 In 1938, Mother married a poor farm boy from Mangum, Oklahoma. Robert L. Downing came from an even larger family than Mother's and at the age of 13 had to quit school in order to help earn money to support his parents and fourteen siblings. They were both 21 years old when they married. Within a year or so, the new couple moved to Baytown, Texas, where it was said jobs were in abundance. In the next fifty years together, they managed to carve out a living, create a home, and see four children born into their family. When her first child was born (her first and favorite one...namely, me), she quit her job and became a full time professional mother and home manager. Throughout this period, Mother remained loyal to her husband, cared for her children, and established a home where there were standards of behavior and conduct. Meals were home prepared, and dining in a restaurant was usually reserved for Sunday after church.  We children never worried about food, clothing, shelter, accidents, or love because mom was always there.  Dad was there, too, and played an equally important role.  Although he brought home the bacon, Mom cooked it.  Honesty and integrity were just two of many high expectations in our relationships with one another and our acquaintances.
Mother was a bit of a disciplinarian and expected...demanded...that her children behave properly both at home and away.  She did not flinch from the observed need to give one of her kids a swat (after a warning) to remind the child (probably one of my sisters) that she was being pushed to the limit.  She was sort of the first line of defense when it came to discipline, however.  If the situation really went south, that was when she called for backup (Dad) to establish order.  I knew I was in deep trouble when I saw Dad removing his belt or, if he was outside, reaching into his pocket for his pocket knife and cutting off a low-lying branch of a tree and stripping it of its leaves.  Bleeding heart liberals today would yell "child brutality!" at such actions, but the discipline worked...I behaved...and I never doubted my dad and mom loved me. Usually with just a few minutes of the perceived torture, we were all happily engaged in whatever activity going at the time.
I do remember, however, one time when I was a little older...around twelve or so, I did something to deserve a swat from Mom.  Sure enough, she popped me with whatever...and I laughed and said, "That didn't hurt!"  To which she replied, "Let's wait till Dad gets home."  I knew I had just committed a cardinal sin and was about to reap my judgement which I did a few hours later when Dad got home.  After that, I grimaced whenever Mom disciplined me whether it hurt or not.
In 1950, Mother and Dad were introduced to Pentecost and in a matter of weeks were baptized,
received the Holy Ghost, and began their long, faithful walk toward their eventual spiritual home. Mother, along with Dad, created a home built on spiritual values and passed those values to their children, not just in word but in deed. Mother's legacy lives within her children, grandchildren, and great-grandchildren.

There's an old song that states: 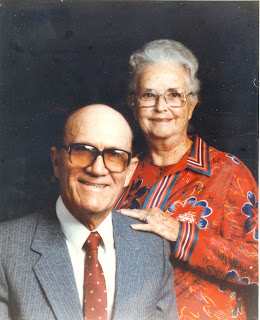 In 1990, Dad passed away, and Mother's loyalty to his memory never wavered, and after 52 years of marriage, she never really recovered from his loss. She would live with his ever-present memory for another 14 years.
On December 24, 2004, the family laid Mom to rest in a simple, elegant ceremony at a small farming community cemetery in her home state of Oklahoma. She had survived the Great Depression, World War II, and 87 years of life. I was reminded of the admonition of Paul to the Philippians in his epistle to the Church:

"Finally, my brethren, rejoice in the Lord."

Though she has been sorely missed, she lived a full life, faithful to her husband, her children, and her God. And today I can rejoice in the Lord…..because Ethel Mai (New) Downing was my mother.
Posted by Bob Downing